Wild Fire turns up the heat 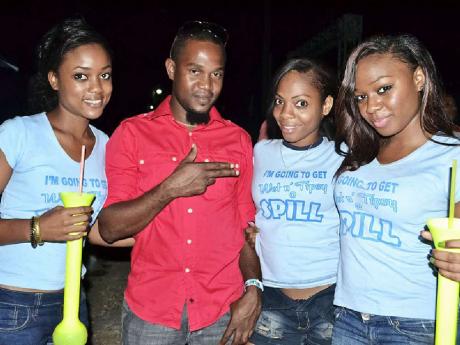 Doubts about whether the second staging of Wild Fire party at Pier One in Montego Bay would be successful were extinguished when the OutDeh team pulled off one of their best events to date.

Wild Fire had to compete with several other events being staged last Saturday, but loyal party fans registered a strong attendance at the event.

Upcoming disc jockey DJ iGosh teased the crowd with his musical selections, having them demanding that he play more for their partying pleasure. His set was well-received and was followed up by renowned Montego Bay music selector DJ Jigga.

The musical rescue team continued its onslaught at the turntables as Kingston-based disc jockey Chromatic made his presence felt as the entertainment-hungry audience partied into the wee hours of Sunday morning.

New venue gets thumbs up

The group of entertainment entrepreneurs noted that the move to Pier One this year worked out to be a good decision. Last year, Wild Fire was held at Martina's Bar and Grill near the Montego Freeport Police Station.

"The change in location offered a better ambience and capacity to hold the record turnout that we had. It was quite overwhelming, to be honest, and patrons obviously enjoyed themselves and are asking when is the next one," said Horace Daley.

Daley, who is the marketing director of OutDeh.com, added that the team consistently promoted the event two months leading up to the party, something he revealed paid off.

"We are grateful for the sponsors that believed in the event and came on-board, and we wanted to guarantee its success, and as such, a huge amount of effort went into promoting Wild Fire, and the party fans answered the call."