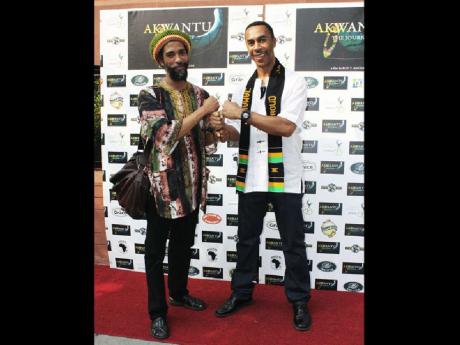 Jamaica-born Hollywood stuntman Roy T. Anderson (right), producer and director of 'Akwantu: The Journey', knocks fists with Dr R.A. Shabazz on the red carpet of the Harlem screening of 'Akwantu: The Journey' on Sunday, May, 27, at the Poet's Den Theater in Harlem, New York. The film will have its world premiere in Charles Town, Portland, on Friday, June 22, at 6 p.m. - Contributed Photo

Charles Town is one of two major active Maroon villages in Portland, Moore Town being the other. It got its name from former governor of Jamaica, Admiral Charles Knowles.

After Quao, the hero of the Windward Maroons, signed a peace treaty with the British on June 23, 1739, the tension that existed between Quao and Nanny was brought to the fore and split the Windward Maroons between the two great leaders. Nanny's group went with her to a place now known as Moore Town. Quao took his followers to an area called Crawford Town, where violence erupted in 1754. They were removed and settled three miles away at present-day Charles Town.

Over the years, Quao's Day has been celebrated in Charles Town on June 23, but since 2009, it has been incorporated into the annual Charles Town Maroon Conference where papers on the Maroons in the Caribbean region are presented by local and international scholars, in addition to cultural and culinary offerings.

At this year's conference, the highlight will be the world premiere of Akwantu: The Journey, a feature-length documentary shot in Ghana, Africa, Jamaica, and the United States by Hollywood stuntman Roy T. Anderson. This Jamaica 50-endorsed film is the story of the indomitable Jamaican Maroons and their triumph over the British.

Another high point should be the acceptance on Saturday of the Nanny/Quao Abeng Award by Susan Robeson, the granddaughter of the late great African America bass-baritone singer and political activist, Paul Robeson, on his behalf.

In an email to Colonel Frank Lumsden, Susan writes: "It is a most special honour that the Charles Town Maroon Council bestows on my grandfather, Paul Robeson. Thank you for the recognition and decision to award the Nanny/Quao Abeng Award to my grandfather."

The papers to be presented on Thursday will be on the themes 'Maroon Freedoms', 'Maroons and the Political Imagination' and 'Maroon Environments'. There will also be copoeira demonstrations, and a hike to the 18th-century coffee plantation at Orange Vale. Artefacts taken from the slave quarters on this property will be on display in the Maroon museum. Verner Zipps' movie, The Jamaican Maroons, will close the first day of activities.

Friday's academic presentations will be on 'Circum-Atlantic Maroon Strategies' and 'Maroons and Women'. The latter is sponsored by the Institute of Gender and Development Studies at The University of the West Indies, Mona. Then, after the screening of Akwantu: The Journey, the Night of the Ancestors will continue with an explosion of hypnotic Maroon drumming.

Quao's Day cultural activities on Saturday should include performances by the Charles Town Maroon Drummers and Dancers and Friends; Halifax Poet Laureate, Shauntay Grant, a descendant of the Leeward Maroons who were tricked and shipped to Nova Scotia, Canada; a ceremonial parade of local and international Maroon leaders; a fashion show by Ayawear; and a movie called Studio One Drumming.