'Windscreen cleaners' ... not above the law 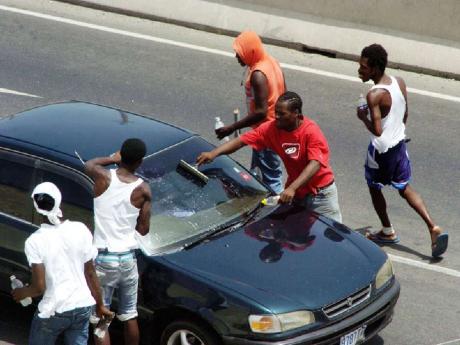 Windscreen cleaners are an annoyance to many motorists in the Corporate Area. - File

It appears that regardless of the 'offence' committed by someone labelled as poor or a 'sufferer', there will always be someone to come to his/her defence. It's as if carrying any of these labels is a licence to do just about anything.

They can squat on government land, capture private property, build houses on the gully bank, sell on the sidewalk, take out National Housing Trust loans and refuse to pay them back, force motorists to pay for a service s/he doesn't want, and yes, even spit on the motorist or the windscreen and it can all be explained away, especially by the 'learned' ones.

Perhaps Professor Carolyn Cooper has always catered to these 'windscreen cleaners', hence she has not been subjected to much abuse that is hurled at motorists should they dare to say no. Even when you are forced to give in, you had better 'mek it mek sense' or be prepared to have your 'offering' thrown back at you. "A who yuh a gi dis bwoy?" "Yuh tink a church yuh deh?" Or, "A dead yuh wann dead." Add to that the other abuses and you have the making of serious confrontations.

Some time ago, the police Traffic Division attempted to remove 'windscreen cleaners' from the streets and was criticised by many, including a prominent attorney. Now they are back in greater numbers and with a renewed sense of aggression, as if making up for lost time. It seems the defence offered has heightened their sense of entitlement and now motorists must pay up or else.

Until and unless the authorities take charge of this situation, there is likely to be many more news-making incidents, as no self-respecting motorist is going to let himself be subject to no end of abuse. And don't tell me to go report it to the police. Why should motorists be expected to obey the law and to stop at the traffic light, when in so doing they run the risk of being abused?

Should we start running the red light or blocking the road, or is the Government waiting on future deadly clashes before something is done about removing these persons from the street? It doesn't seem fair that one set of persons are required to obey the law while the very law turns a blind eye to others on the premise that they are 'sufferers'.

One country, one people, one law.