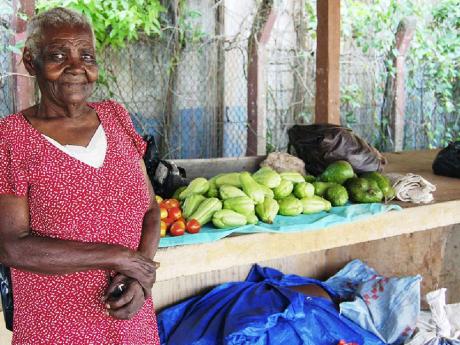 Ninety-four-year old Elsie Mynes at her stall in the Porus Market. 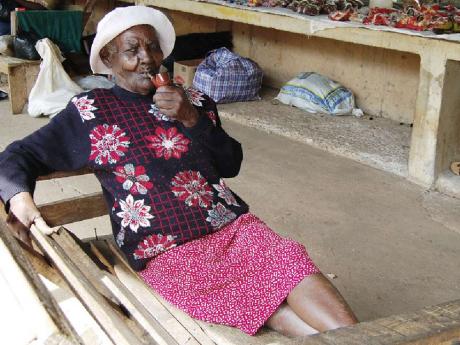 Elsie Mynes relaxes with her tobacco pipe while selling at the Porus Market.
1
2

AT AGE 94, Elsie Mynes still plies her wares at the Porus Market, a job she has been carrying out for the last 84 years.

She is following in the footsteps of her mother, Irene Thompson, affectionately called 'Nana Joe', who sold goods in the market up to 103 years old.

Elsie is from the district of Bellefield in the parish and is the older of two children for her mother. She has a brother living in Ocho Rios who is in his late 80s.

She started selling in the market with her mother when she was 10 years old.

"I used to help my mother. Those days, Porus Market was nice. People from all over came to sell here - from Blue Mountain, Mount Pleasant, and even places in Clarendon like Ritches," Elsie said.

She added: "My mother used to sell scallion, ripe banana, naseberry, tomato, yam, and other food stuff, which she planted. I remember people from Beckford Kraal in Clarendon used to carry wet sugar to sell by the quart. You use it cook. They also had things like ginger sugar to sell, which was real nice.

"We used to eat it when we a little pickney. They used to cut it in squares and make it by boiling the sugar in the copper pan with ginger."

Elsie spoke fondly of her mother.

"She used to run all bout the market playing with the boys them," Elsie said. "The only time she went to the doctor was two weeks before she died - at 107 years and five months. The doctor didn't even give her a sweety as medicine. The only medicine she took was sinkle Bible (aloe vera). She wasn't ailing or anything when she died."

Elsie herself is in fine fettle. "I am doing okay. The last time I went to a doctor was last year, and the doctor run mi out a him office and said that mi should stop provoke him because nothing nuh wrong with mi," she said, bursting into laughter.

"I don't have to be taking any medicine for any sickness. I just drink mi bush tea like search mi heart. Plenty bush up my way."

Elsie has given birth to 13 children, three of whom are deceased.

"All of them turn big people and gone bout them business," she disclosed. "The first two daughters alone gave me 30 grandchildren, and all of them a big people."

Elsie is devoted to her business at the market. When The Gleaner visited her, she was selling cho cho, sour sop, and pumpkin, which she got from her home, as well as cabbage, carrots, yam, Irish and sweet potato, which she said she bought to sell.

She goes to the market on Wednesdays and stays there until the end of the day on Saturdays. "Doing this better than you have to beg. I don't like the word beg, so I do this so that I don't have to beg anyone nutten," Elsie said.

She lives at her house with one of her grand-daughters, and recently, one of her daughters went to live with her because she was ill.