Police kill seven in a day 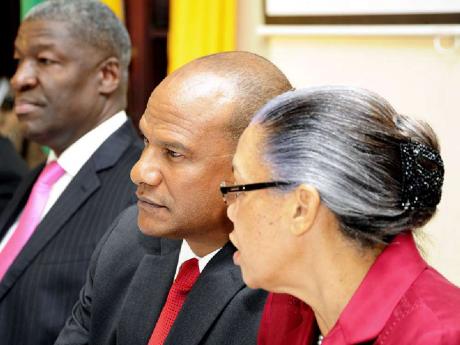 MINISTER OF National Security Peter Bunting yesterday admitted that it was unusual for seven persons to be killed by the police in less than 24 hours, but at this stage he was awaiting the relevant authorities to carry out their investigations before he passed any judgement.

"As unfortunate as it is, there will always be cases of justified use of force resulting in fatalities, but I don't want to comment on the particular incidents because they will go through their normal investigation by INDECOM (Independent Commission of Investigations)," Bunting told The Gleaner yesterday.

"It is unusual to have so many in a 24-hour period. However, at this point, nothing has come to my attention which would cause an alarm other than just the numbers. And I have no information to suggest that there is any serious doubt in the differences in the account of the police and the community. At this stage, I will allow the proper authorities to investigate the incidents," he stressed.

According to the Constabulary Communication Network, seven "gunmen" were fatally shot by the police in St Catherine and Clarendon in three separate incidents on Thursday.

In the first incident, three unidentified men were killed about 3:50 p.m. in Jacobs Hut, Denbigh, Clarendon. The police said they seized two firearms with ammunition.

In the second incident, which occurred about 5:45 p.m. in Innswood Estate, St Catherine, one man was killed and a firearm with ammunition seized. Identified as 26-year-old Ricardo Beckford, otherwise called 'Stun' and 'Paddy Foot' of Job Lane, Spanish Town, the police said he was a prime suspect in the quadruple killing in Rejoin district in Hanover on May 2.

The third incident took place about 9:30 p.m. in Ensom City, Spanish Town, St Catherine, where the police said three men aligned to the Clansman gang were killed and two firearms with ammunition seized.

INDECOM, which is investigating all three incidents, said its forensic team had already processed the scenes. They also noted that the policemen who were on the operation have been identified, their hands swabbed by the incident scene examiner and they were served notice to provide statements.

INDECOM is still collecting witness statements and is asking anyone with information to come forward.

Susan Goffe, chairperson of Jamaicans for Justice, said seven persons killed within that short period was cause for concern.

"When there is this high number of persons killed by the police in a short space of time, it does raise questions that need to be answered, especially when this comes in the aftermath of a number of very questionable incidents," she said.

Goffe is calling on the minister of national security and Commissioner of Police Owen Ellington to stand by their promise for greater accountability from the police force.

In the meantime, Ellington told The Gleaner that he had just returned to the island and was yet to be properly briefed on the incidents, so he could not make an informed comment at this time.

Earlier this year, the police came under intense criticism for a number of killings that forced the hierarchy to review the security force's use-of-force policy.