'Chalky Hill roadway is a disgrace' 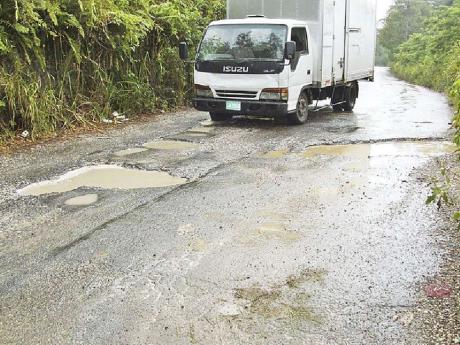 A motorist tries to negotiate the potholes on the Chalky Hill main road, St Ann. - PHOTO BY CARL GILCHRIST

MOTORISTS HAVE condemned the poor state of the Chalky Hill roadway in St Ann.

Barry, a Kingston resident who does delivery to the north coast and uses the road every week, told The Gleaner: "The road waan fix, it bad, bad, bad."

Another driver, a Montegonian who calls himself 'Jus Cool', was more vocal.

"Bwoy mi caa believe the road stay like this. A years now it stay so man. It gone bad, nutten naw really gwaan, man. Too much pothole, watch deh," he said, while pointing to the potholes that he was still to negotiate.

"Mi load wit tings an mi affi a crawl like a baby. Is a disgrace, man," he added.

Meanwhile, a resident of Steerfield, one of the communities impacted by the poor road condition, said the state of the road is unbearable.

According to the resident, who gave his name as Mr Martin: "Bwoy dis condition is unbearable, bwoy. Tyres every day an all a dat. When the rain fall ah di worse ting. Sometime even truck just leave dem back end inna di hole dem through how di hole dem deep."

Martin said the road was considered the best in St Ann, but has been allowed to deteriorate over time.

He believes that overladen delivery trucks and trailers cause much of the decline of the road surface.

"Bwoy, a the worse it ever get, it cyaa get no worse," he complained.