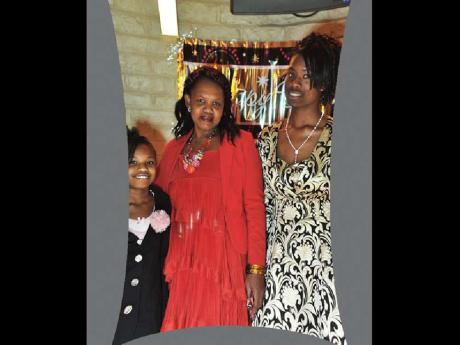 IN OCTOBER last year when Jamaica-born United Kingdom (UK) resident Angelia Christian returned to the island after 20 years, it was not only to enjoy a well-earned vacation, but also to introduce Jamaica to her two daughters, Holly, 12, and Petra, 16.

But a near tragedy put a damper on proceedings as the daughters had an accident at the swimming pool of the north coast resort where they were staying. Fortunately, there were no serious injuries to the siblings.

However, an impressive display of professionalism at the St Ann's Bay Regional Hospital, where the two were taken, has urged Christian to say thanks to the institution in quite a tangible way.

Christian, affectionately called Angel by her friends, returned to the United Kingdom with what she has termed an "angelic mission" to raise £10,000 worth of equipment for the facility based on what she said were the quick response, skill, and competency showed by the hospital staff, especially in light of the limited resources that were available.

"I want to commend in particular Dr Tameka Henry, who was absolutely fantastic! Sister Carmen Marsh-Smith was also lovely. The staff was very polite and well-mannered," said Christian.

She added: "I met with the CEO, Mr Keith Richards, and discussed the hospital and its needs. The staff at the hospital does a good job in very challenging circumstances."

Christian said from the money she is hoping to raise, she will be able to donate 30 beds, 10 wheelchairs, and other medical equipment to the hospital. In addition, she hopes to obtain a refurbished ambulance from the National Health Service to be given to the hospital.

Christian, a former model who now works with Her Majesty's Prison Service in London, England, is to use her skills and experience as an organiser to stage a fund-raising dinner on June 30, at the Round Chapel in Hackney, London.

She has already garnered the support of the Jamaican High Commission in London; her church, the People's Christian Fellowship; friends; and co-workers.

It is unclear how much the dinner is expected to realise, but Christian is appealing for support from all sectors.

"This year marks Jamaica's 50th year of Independence, and I believe that Jamaicans in the UK and right across the world need to participate more in the development of our home country. I invite everyone who has any connection to Jamaica to support this important cause," she said.