'Teaching is my baby!' - Teacher starts own school after controversy 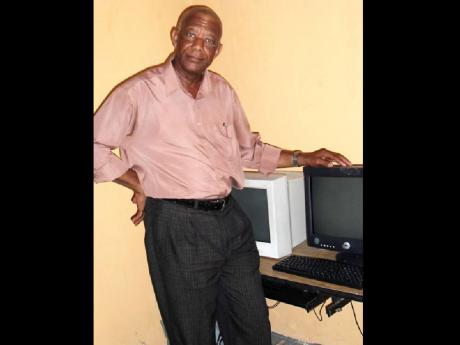 Junior Coley in the computer room.- Photo by Nackeshia Tomlinson

IN 2006, Junior Coley was involved in a controversy that made national headlines. It had residents in the small community of Bouge demonstrating on his behalf as they thought he had been overlooked as a candidate for the post of principal at a primary school.

Since then, Coley has moved on and is now the proprietor and principal of Coley's Academy, an independent institution located in Braes River that emphasises personalised academic attention.

Coley said the school started in 2007 in Santa Cruz. He moved to the current location in 2008 when he realised that people with younger children were visiting him for help.

Eleven students, ranging from grade three to the secondary level, are currently registered at the school. Coley said he follows the prescribed Ministry of Education curriculum, but also emphasises instruction in civics and cultural awareness. Students are prepared for the Grade Four Literacy Test and the Grade Six Achievement Test, and are also taught aspects of the high-school curriculum.

There is also an after-school programme in which tutoring is offered to "adult women who want to catch up with basic mathematics and English to get a job to go on the farm-work programme".

Coley has taught for more than 30 years in the public-education system.

"Teaching is my baby. I realised that several young people, after leaving high school, did not do well, so they come back to the various communities and have nothing to do."

The educator said his school is different because of the maximum attention students receive both in class work and the guidance in personal development.