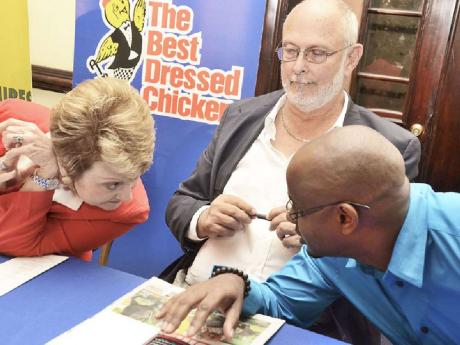 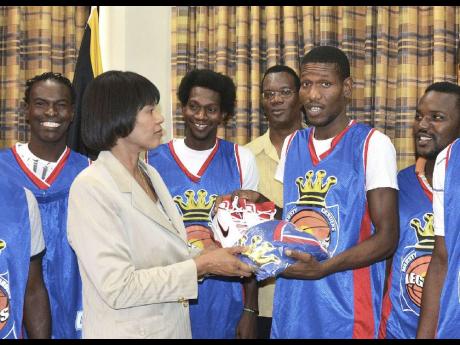 Prime Minister Portia Simpson Miller (second left) makes a presentation of uniforms to Baldon Todd (second right), captain of the Majesty Gardens Legends basketball team, and other team members (from left) Steven Rookwood, Jalan Golding and Oneil Francis, on Wednesday. The presentation was made possible through the Constituency Development Fund allocation to the South West St Andrew Development Fund. The team is now participating in the National Basketball League. Todd assured the prime minister, who is also member of parliament for the area, that the team would be good representatives of the community. Also participating is Councillor Karl Blake (third right) of the Greenwich Town division. - Contributed
1
2

The matches scheduled for tomorrow have been postponed owing to funeral for the late Mystic and Rowe's Strikers female player, Sonia Blair, who died recently after a short illness. The Jamaica Skittles Federation has extended condolences to her family.

Defending champions The Gleaner made a successful start in the Scotiabank Group-sponsored Business House KO football competition when they clipped Red Stripe 1-0 in first-round action at Red Stripe Oval on Tuesday.

In a hard-fought contest, The Gleaner got the all-important goal from Chadwyck Vassell in the 89th minute, to advance to the next round.

On the same day, Wisynco defeated home team NWC 2-0 with a goal in either half from Calbert Coke and former Premier League player Girvan Brown. And in the third KO match on Tuesday, Carib Cement clipped NHT 1-0, thanks to a late goal from Orlando Lowe.

Two other first-round matches are scheduled for today - BOJ vs Norman Manley International Airport at the Edward Seaga Sports Complex, and Division I league champions Petrojam vs Grace Kennedy at Tinson Pen. Both matches start at 3:30 p.m.

It was the second time that the firemen were having the measure of The Gleaner. They beat them decisively as well in the first round at The Gleaner Sports Club, North Street, some weeks ago. Fire Brigade have now won four of their five matches, while five-time champions The Gleaner have lost two and won three to remain in contention for a quarter-final spot.

In the semi-finals, Mile Gully FC had beaten Cobbla Gully Strikers 3-0, courtesy of goals from Romario Renford, Kareem Walker and Kimani Blake. Hillstars had secured their passage with a 2-0 win over Villa United, with Jarvis Matthis and Malik Gordon scoring.

In the final at Kirkvine Sports Club, Hillstars had a dream start when Matthis scored in the second minute for a 1-0 lead. Hillstars maintained their lead until the second half when Mile Gully took over control of the match.

The day's proceedings features a double-header which will kick off at 1:30 p.m. with a matchup between home team Holland Police Youth Club and Northampton, while at 3:30 p.m., Round Hill will face Houghton.

In the last week's final preliminary matches, Round Hill secured their spot as second best team with a 4-1 win over Middlesex. Houghton defeated Northampton 2-0, but the two also secured semi-final spots. Holland PYC ended as the top team with a 3-0 win over Longwood.

In previous matches between the four, Northampton had beaten Holland PYC 1-0, while Round Hill and Houghton had played to a 0-0 draw.

The two teams making the finals will automatically qualify for next season's Major League.

Holland Primary ended the reign of Burnt Savannah Primary as champions of the Victoria Mutual Building Society's (VMBS) St Elizabeth Primary School football league, defeating them 1-0. The important goal was scored by Martin James in the fifth minute of their one-hour game.

The two teams were not strangers, having played in the same preliminary zone which Burnt Savannah won, but only on goal difference. However, during that stage, Holland had won 1-0. Lacovia took third place after defeating Marie Cole 1-0.

Both finalists were impressive in the semi-finals. Burnt Savannah got the better of Marie Cole Primary 3-0 with goals coming from Brandon Robinson, Roshana King and Ardene Chambers.

Holland swamped Lacovia 4-0 in their semi-final, with Roshawn Grant, Jacon Smith, Ronaldo Maitland and Martin James on the scoresheet. James emerged the leading goalscorer in the competition, netting eight goals.

Belair of Manchester emerged the Middlesex champions of the Scotiabank National Prep Schools cricket competition after defeating St Thomas More of Clarendon by 18 runs in the final on Thursday.

Belair, who won the Manchester leg of the competition after completing five consecutive victories, batted first and compiled 148 for seven from their 20 overs. Akeem Davis provided most runs with 45.

Despite a spirited chase, St Thomas More were bowled out for 130, even while one of their batsmen got the game's top score of 49. Kimani Grashin was the top bowler for Belair, taking three wickets for 11 runs off four overs.

In the previous week's semi-finals against another Clarendon team, Monymusk, Belair had successfully chased 127, with Davis getting a top score of 33.

In their semi-finals, St Thomas More of Clarendon had defeated Carigrappi of Manchester after also successfully chasing 137.

Mile Gully FC will go in search of their third consecutive win when the newly established C&D Construction and Engineering Manchester Under-13 competition continues this morning at Brook's Park in Mandeville.

Mile Gully FC, winners of the Under-15 competition on Wednesday, began with 6-0 spanking of Kendal. Last weekend, they edged fellow debutant, Ricam Strikers, 1-0. In other matches last weekend, Kendal rebounded with a 3-0 win over Mandeville United, who had drawn the previous weekend, while Ricam in their second match up of the day got the better of Mandeville United 2-1.

The competition was inaugurated last weekend by the Manchester Football Association (MFA) in an effort to boost its performance in the annual summer South Central Junior League, which is sponsored by Juici Patties. This age group has been dominated by St Catherine and Clarendon teams over the years. The MFA has assured that snacks will be provided throughout the day for all participants.

Juventus provided a torrid welcome for Harmons in the Jamalco Football League with a 3-1 win at Wembley Football Club in Clarendon. Harmons had taken a two-year hiatus from the league.

Juventus' goals came from the boots of Ian Palmer, Andrew Vanzie and Paul Harris, while Rollin Ranger secured Harmons' consolatory strike. The Bottom Halse team achieved the only other win of the third round, as Dwyane Harris' goal gave them a 1-0 win over Port.

Two other games were drawn. Savannah and Top Halse Hall ended 0-0, while Sunset rallied from a 1-3 deficit to record an exciting 3-3 draw with Wembley.

Tomorrow: New Bowens vs Harmons at 2 p.m.; and Napoli vs Mineral Heights at 4 p.m.

Defending champions Wanderers FC, fresh from their 2-0 win over Portmore United in their final preliminary-round game last Sunday, face Daytona in the opening semi-final game of a double-header in the LIME Leander Marshall-sponsored Portmore U-13 Football League at the Cumberland field this afternoon at 2 p.m.

In the second semi-final at 3:30 p.m., Cumberland, who ended the preliminaries on top with 13 points, square off against Portmore United. Portmore have lost three out of five games, including a 3-0 defeat at the boot of today's opponents.

Gregory Park Primary earned the right to represent Portmore in the Institute of Sports (Insports) LIME All-Island Primary football competition after their exciting 3-2 win over Bridgeport in the final at Spanish Town Prison Oval recently. Gregory Park's hero was Shemar Earle, who struck the winner in time added, which put players and fans in a frenzy.

Two goals within a minute from Khymani Gibbans (27th) and double-scorer Earle (28th) saw Gregory Park with a 2-0 lead at half-time. But Bridgeport hit back with two unanswered goals after the break from goalie Jamali Brown (38th) and Chad Ellis (42nd). Brown scored from a kick upfield which deceived his Gregory Park counterpart. This left Earle to finish off the match in fine style.

Two matches are on in the Portmore Under-15 football league tomorrow. In the first match of a double-header at the Greater Portmore field, Cumberland take on Westchester at 2 p.m., while in the feature match at 4 p.m., East Portmore Portals face Newtown Braeton.

Popular medical doctor and technical director of Jamaica's women's hockey team, Dr Michelle Holt, stressed the necessity of proper nutrition while addressing a group of youngsters duringthe Milo-sponsored Portmore Metropolitan Under-15 Cricket Clinic, which was held at the Bridgeport Sports ground last Saturday. She stressed that for athletes to perform at their best they need to eat properly before and after training.

Karen Mussington of Milo said that her company was committed to the league. She also gave out booklets on nutrition for all the participants.

President of the Jamaica Cricket Association (JCA), Lyndel Wright, enlightened the youngsters on the benefits of making cricket a career and the importance of discipline.

Also in attendance were Courtney Francis, president of the Portmore Metropolitan Cricket League (PMCL); Mayor of Portmore George Lee, who promised the cricketers that in the near future they will get a proper facility for playing cricket in Portmore; Lester 'Ken' Crooks and Charles Simpson, a former president of the PMCL. The coaches were Hugh Hinds, Milton Thomas, and Donald Breadwood. They taught the youngsters techniques in batting, bowling, fielding and wicket-keeping.

CAPTION: Prime Minister Portia Simpson Miller (second left) makes a presentation of uniforms to Baldon Todd (second right), captain of the Majesty Gardens Legends basketball team, and other team members (from left) Steven Rookwood, Jalan Golding and Oneil Francis, on Wednesday. The presentation was made possible through the Constituency Development Fund allocation to the South West St Andrew Development Fund. The team is now participating in the National Basketball League. Todd assured the prime minister, who is also member of parliament for the area, that the team would be good representatives of the community. Also participating is Councillor Karl Blake (third right) of the Greenwich Town division. - Contributed