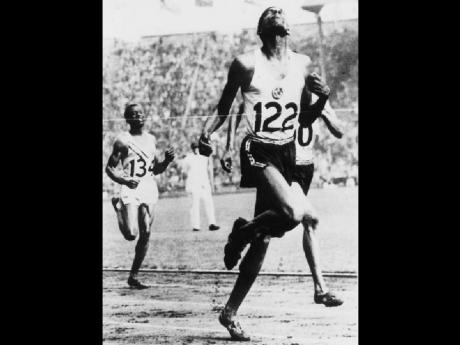 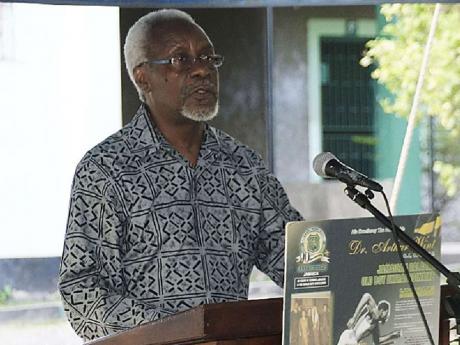 P.J. Patterson ... who wrote the foreword for Valerie Wint's book, speaking at 'Raising The Bar' - a presentation of the Valerie Wint book, 'The Longer Run: A Daughter's Story of Arthur Wint', to celebrate his 92nd birthday and Calabar's centenary. - Contributed 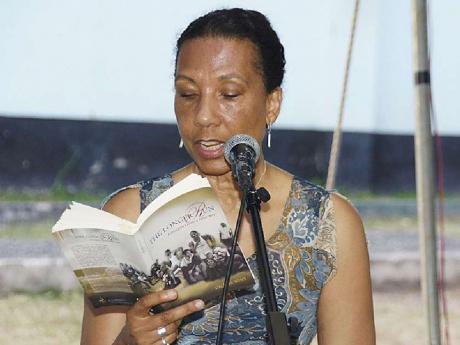 "Dr Arthur Wint was treated like a god in Finland," former Prime Minister P. J. Patterson revealed when he gave his address recently at the presentation of the book, The Longer Run: A Daughter's Story of Arthur Wint, read by the author, Valerie Wint, at the Calabar High School centenary celebration event, 'Raising The Bar,' on Dr Wint's 92nd birthday.

Patterson was referring to Dr Wint's four years of diplomatic service, 1974-1978, when he served Jamaica as high commissioner to the United Kingdom, and ambassador to Sweden, Denmark and Finland.

As minister of foreign affairs, Patterson made a government trip to Finland with Ambassador Wint. There he was able to observe first-hand the adulation the 1948 Olympic 400 metres gold medallist received from Finnish citizens. It was clear that they not just remembered, but highly respected, Dr Arthur Wint. It was in their capital, Helsinki, 25 years earlier, that Jamaica, with Wint running the first leg, had won the 4x400m Olympic gold medal in the then world record time of three minutes 04.04 seconds.

In highlighting the national significance of Dr Wint's unique legacy to Jamaica, Patterson stated with conviction, "Dr Wint raised the bar for every Jamaican athlete competing on the world stage after 1948 ... It is no exaggeration to assert that Dr Arthur Wint laid the foundation for Jamaica as a world brand ... From Herb McKenley, George Rhoden, through Don Quarrie, Merlene Ottey, Deon Hemmings, Veronica Campbell-Brown - to Asafa Powell, Yohan Blake and Usain Bolt, Arthur Wint created the template, and he blazed the trail that will continue to inspire future generations."

In establishing Dr Wint's foundational relationship with Calabar, Patterson reminded the audience of Calabar students, teachers, old boys, and other guests, by saying, "It is fitting that the book, The Longer Run: A Daughter's Story of Arthur Wint is being presented within the Calabar community, as we celebrate our centenary and also honour one of our most distinguished alumni. For it was at Calabar that Wint's athletic genius first became evident - where he first gave notice, for all who could discern it, of his extraordinary talents."

The former prime minister continued to trace Wint's contribution to Calabar by stating, "Arthur immersed himself fully in the life of the school. His bearing and manner were those of a young man destined for greatness. In his first year, 10-year-old Wint was the star performer at the 1932 Boys Champs, winning both of the Class 3 sprints. He repeated this feat the following year, when for the fourth consecutive year the championship cup came to Calabar, then at Studley Park Road. ... In 1935 and 1936, Wint continued to be an outstanding performer for the school in athletics, and in 1937 ... Wint was the Champion Athlete.

Patterson revealed to his audience some unfamiliar facts. "What is not so well known is that Arthur Wint won as many medals for the school in swimming as he did in athletics," Patterson said.

"In 1934, Calabar's swim team, with Arthur Wint in Class Two, dominated the meet, amassing 61 points. The Simpson Shield was taken to Studley Park - where it would remain for seven consecutive years as the school established its supremacy in inter-school swimming."

In placing Wint's legacy in perspective with the upcoming 2012 Olympics, Patterson said: "Today's event is also of timely and pointed significance because Arthur Wint won Jamaica's first gold medal in the 1948 Olympics. The Olympics have returned to London for the first time since then. We expect that our own National Anthem will be played again and again, this the 50th year of our Independence."