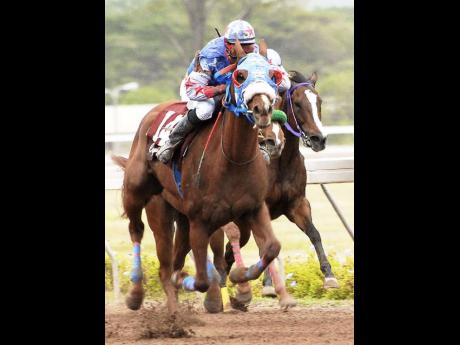 BURNING MEDIC, with Orayne Sewell aboard, streaks past rivals to win the Jockeys' Training School race over 1100 metres at Caymanas Park on Wednesday. - Colin Hamilton/Freelance Photographer

Horse of the Year SAINT CECELIA looks all set to notch her seventh consecutive win when she takes on four opponents in the annual renewal of the grade one feature for the Eileen Cliggott Memorial Trophy over 1300 metres at Caymanas Park today.

Trained by Spencer Chung, who posted the unbeaten TYPEWRITER to win the Derby a week ago, SAINT CECELIA, easily the fastest horse in Jamaica, looked awesome when leading home the previously unbeaten American 3-y-o colt, BLAST THEM AWAY, on her seasonal debut in the Lotto Sprint on May 19.

Reporting even sharper for this race, SAINT CECELIA should once again defy topweight of 57.0kg with customary rider Shane Ellis aboard.

The Wayne DaCosta-trained BLAST THEM AWAY was unbeaten in seven starts prior to the Lotto Sprint, but found the speed of SAINT CECELIA too hot to handle and finished 4 1/2 lengths second in that fast-run race over 1100 metres, which saw SAINT CECELIA equalling the stakes record time of 1:04.4.

BLAST THEM AWAY could be seen to better advantage over the additional furlong of this race and forms a twin challenge with another progressive American 3-y-o, NOON IT IS, who steps up in class in a bid for her fifth consecutive win.

Having had a sample of grade one pace recently, BLAST THEM AWAY should be more dangerous than the Gary Subratie-trained NOON IT IS, even though asked to carry 2.0kg overweight for the services of leading jockey Dane Nelson.

However, SAINT CECELIA is such an exceptional racer that it will take a brave punter to oppose the daughter of Burning Marque-She's On Wheels. She should not be caught by BLAST THEM AWAY, even with the additional furlong to travel.

I am Thankful expected to win

Elsewhere on the 11-race programme, the lightly raced I AM THANKFUL is confidently expected to open his account in Division I of the 3-y-o maiden condition race over 1200 metres, to be contested by 11 starters.

From the stables of champion trainer Wayne DaCosta, the bay gelding has proved competitive in two races so far, chasing home the outsider NUH VEX in a fast-run straight five race on April 25.

I AM THANKFUL (Dane Nelson up) has been taken to task at exercise in preparation for this race, galloping five furlongs in a brisk 1:01.3 on Monday morning and should prove too strong for MENTALIST and MOVIE DIRECTOR.

I also like LASHING FORCE to win the second race, AALIHAAT to repeat in the third, down-in-class PRIME MINISTER to win his sixth race of the season over his favourite trip (1820m) in race six, REASONABLE PRESS to stave off fellow American filly GO GO YVONNE in the eighth, and GALACTUS in the 11th and final.