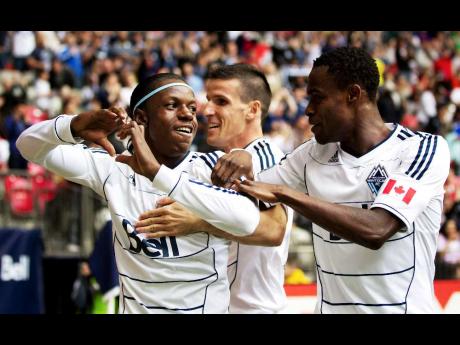 (From left) Vancouver Whitecaps' Darren Mattocks of Jamaica, Sebastien Le Toux of France and Gershon Koffie of Ghana celebrate Mattocks' goal against the Houston Dynamo during the first half of a MLS soccer game in Vancouver, British Columbia, on Sunday. - AP

Several Jamaicans return from World Cup Qualifying (WCQ), but injury will continue to keep at least one key Reggae Boy, who missed international duty, off the field when Major League Soccer (MLS) action resumes this weekend.

A host of national players, including Dane Richards (New York Red Bulls), Ryan Johnson (Toronto FC), Lovel Palmer (Portland Timbers) and Je-Vaughn Watson (Houston Dynamo) should be available for their clubs in North America's top football league after playing in two WCQ against Guatemala on June 8 and Antigua and Barbuda on Tuesday.

Jermaine Taylor, Watson's clubmate, was also called up by Jamaica against Antigua and Barbuda, but did not play, while goalkeeper Donovan Ricketts, who started against Guatemala but was substituted after suffering a knee injury and missed the second game, is uncertain for Montreal Impact.

Earlier this week, Jesse Marsch, Montreal's head coach, said Ricketts was "fine", but would be evaluated before a decision is made on the current Jamaica captain for today's game against Seattle Sounders.

However, when Colorado Rapids travel to Vancouver Whitecaps it will be a case of good news and bad news for two Jamaicans who did not participate in the recent WCQ. Touted rookie striker Darren Mattocks, who was kept out of several early season games due to a burn injury, enters today's match-up in full confidence mode after scoring twice for the Whitecaps in a 3-1 win against Houston last weekend.

But for fellow Jamaican Omar Cummings, tipped to play a significant role in Jamaica's WCQ campaign, the news remains a bit worrying. The Colorado striker will miss today's match, still troubled by an ankle sprain which sidelined him over a month ago.

"Still not 100 per cent and I'm not trying to force it," Cummings said Thursday.

Cummings, who has Jamaica international Tyrone Marshall as a teammate, is training with Colorado. However, he did not want to risk further damage by playing on Vancouver's artificial surface. He hopes to return on Wednesday against San Jose Earthquakes at home on Colorado's grass field.

"With this game (at Vancouver) on turf, it might not be the best time to come back," explained Cummings, whose Rapids are currently fifth in the nine-team MLS Western Conference (WC).

On Wednesday, Vancouver, fourth in the WC, host New York, currently second in the 10-team MLS Eastern Conference (EC). Tomorrow, the Red Bulls and Richards, who started both WCQ, travel to Chicago Fire.

Playing time has also been scarce for Ricketts' club and national teammate Shavar Thomas, who is fit. The central defender was an unused substitute the last four MLS games, after starting the previous five.

"I'm just working hard for a game," Thomas said Thursday. "Every day I go out and compete."

Watson and Taylor will attempt to extend Houston's solid recent form today at home against FC Dallas. Dynamo, undefeated in their last four games, sit seventh in the EC.

Columbus Crew, with Jamaica international Shaun Francis on their roster, are also enjoying good form, rising to fourth in the EC, while staying unbeaten with three wins in their last five games.

Johnson returned to struggling Toronto FC after scoring for Jamaica against Guatemala, to find Dutchman Aaron Winter no longer head coach of the EC's last-place team. However, TFC broke their MLS record-losing streak to open the season with a win in their last game. They travel to Houston on Wednesday.

Tomorrow Reggae Boy Lovel Palmer returns to Portland Timbers when the WC's seventh-place team travels to conference cellar-dwellers Los Angeles Galaxy, the defending MLS champion. Palmer was an unused substitute in Portland's last MLS game on May 26, but played the full 90 minutes in both WCQ.