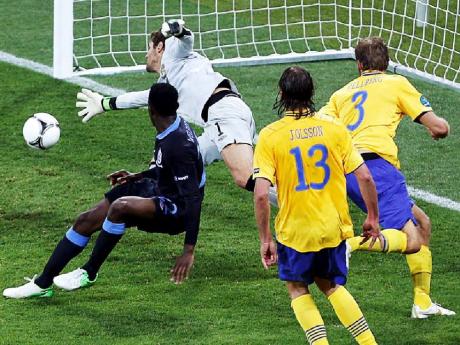 England eliminated Sweden from the European Championship yesterday after Theo Walcott scored one goal and set up another for an entertaining come-from-behind 3-2 win.

Walcott came on as a substitute and made it 2-2 in the 64th minute and then set up Danny Welbeck for the winner in the 78th as England earned their first win over Sweden in a competitive game in eight tries.

Andy Carroll had given England the half-time lead with a powerful header in the 23rd but Sweden fought back through an own-goal by Glen Johnson and a header by Olof Mellberg.

England only need a draw against Ukraine in their last game to advance. The result may also silence some of the critics who thought the team has become too defensive under coach Roy Hodgson, as it proved that it can score goals when it needs to.

Sweden, for their part, let a second-half lead slip away for the second game in a row after falling 2-1 to Ukraine in their opener. While the Swedes put in a much-improved performance yesterday, they once again failed to shut their opponents down defensively.

Andy Carroll had given England the half-time lead with a powerful header in the 23rd minute as Sweden was again exposed in the air, demonstrating exactly why Hodgson elected to start the tall Liverpool forward up front.

Its about time France win

Meanwhile, France won a match at a major tournament for the first time since Zinedine Zidane's head-butt, beating co-hosts Ukraine 2-0.

Jeremy Menez and Yohan Cabaye scored early in the second half for the French, who last won a major match in the semi-finals of the 2006 World Cup. In the final of that tournament, Zidane was given a red card for his head-butt in the last match of his career.

"We scored twice and could have had more,'' France coach Laurent Blanc said. "We have a lot of potential.''

Yesterday's match at the Donbass Arena was suspended for nearly an hour because thunder, lightning and torrential rain forced the players off the field after five minutes. It resumed almost an hour later.