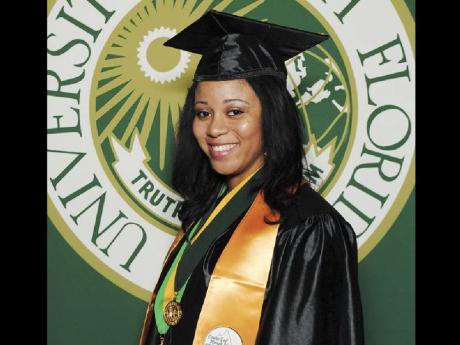 Twenty-one-year-old Jamaican Meika Billings recently claimed top honours at her graduation from the University of South Florida. Billings, who graduated with a bachelor's degree in communication sciences and disorders, was awarded the university's King O'Neal Scholar Award in May as the top graduate of her class with the highest accumulative grade-point average of 4.0.

"I felt very honoured and grateful to God when I found out I was one of 18 out of over 6,000 students who would be awarded for graduating at the top of our class," she said.

Billings, born on July 31, 1990, in Samuel Prospect district near Duncans in Trelawny, is the only daughter of Rashford and Jasmin Johnson. She said that from a very young age, she was encouraged by her mother.

"I was encouraged by my mother to be an avid reader. Hence, I made regular visits to the library and entered a few reading competitions. I won first place in the Trelawny Parish Library's reading competition when I was six years old," Billings recalled.

"In school, I was always one of the students who excelled academically, and I made many friends. I took pleasure in interacting with others in extra-curricular activities and sports."

Her family moved to Montego Bay when Billings was nine years old, and she continued her scholastic drive through her years at Montego Bay High School, where she was head girl between 2006 and 2007.

During high school, she was also involved in several clubs and societies and held several positions.

"Honestly, my time at Montego Bay High School, they were some of the best years of life ... . I made long-lasting friendships and became a more rounded individual," she said.

She moved to Florida shortly after graduation and enrolled at Broward College in August 2008 to pursue an Associate of Arts degree in speech pathology/audiology. In August 2010, she enrolled at the University of South Florida.

"My most enduring memory of Broward College is getting involved in the Phi Theta Kappa Honor Society and becoming more involved in the college and the wider community," Billings said.

Billings will be pursuing her master's degree at New York University this fall with the aim of becoming a licensed speech-language pathologist. She hopes to return to Jamaica to use her skills.

"Research has shown me that Jamaica has less than five speech-language pathologists. Therefore, I strongly believe that my skills and experience will be needed."