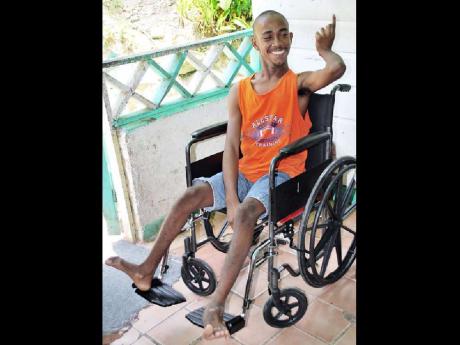 A Westmoreland mother whose 13-year-old son has a condition known to her only as 'quick delivery' received a much-needed wheelchair to assist him to move around.

The wheelchair was gifted by the Moesha Wallace Foundation, which is geared at assisting children with medical needs.

It was delivered to Beverley Patterson and her son, Stephen Spence, at their Mount Stewart home in Cornwall Mountain, Westmoreland, last week.

According to Patterson, her son has been visiting the Cornwall Regional Hospital in St James since he was only eight months old because he was not performing as normal children his age did.

"He started sitting up at two years old," she said. "I am so glad now that I got this wheelchair because now I can take him to church and even to the playfield."

She added: "It was rough before because sometimes I would like to take him to church, or for some fresh air, and I have to hitch him on my side and he has a lot of weight, so it was not easy."

Spence also looks quite mature for his age. At age 13, he has a beard and moustache, which a local medical doctor believes is caused from hormonal imbalances and/or thyroid abnormalities. He believes a paediatrician can assist to possibly slow down the ageing process, but it will all depend on the cause of the condition.

Moesha Wallace Foundation's founder and director, Carmen Wright, was at the handover. The foundation was established in September of 2012 after a rare disease claimed the life of Wright's 12-year-old daughter.

American Selene Dockery was instrumental in securing the wheelchair through the company where she is employed.

"We have our challenges, but we are coming out of the woods now, and we have been reaching out to children, and that is the essence of our very existence - to help youngsters with medical needs," said Wright.

"Our website is www.moeshawallace.org, and persons can visit us to render assistance, or just to see the progress of our work in helping those in need."