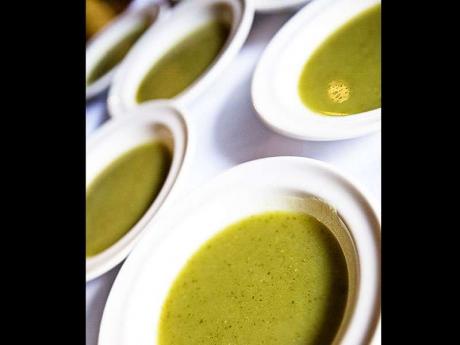 Adam sat at the dining table, carefully placing his Bible to the side. Nobody saw him. they never usually did. The butler placed a large silver covering before him, and removed its lid.

"Sour Cream Soup, sir." he mumbled, tucking a napkin under Adam's chin. Within just a few short minutes he and all the other servants had left for the night.

"Shall we say grace?" Adam asked - nobody cared.

The silence was deafening. Nobody spoke, because nobody ever cared too. Adam watched as everyone began slurping spoonfuls of their dinner.

"They're all different, you know ... ." he said, a bit louder than he usually spoke.

The clinking of the spoons suddenly stopped. even his brother jerked awake. Everyone looked at him, except his Uncle, who was already devouring half the table, stuffing his face with pudding.

His aunt giggled, exchanging shameless glances with his father, her spoon all of a sudden carelessly falling under the table.

"What poison?" his mother asked, playfully twirling her pearl necklace.

Adam took up his spoon, dipping into his soup and took a small sip, his rosemary neatly wrapped around his hand.

His family exchanged strange glances with one another.

"W-What are you talking about?" asked his older brother, suddenly pulling on his collar. He seemed quite ill.

"For you - a bit of Oleander," Adam said, taking another sip from his bowl.

His brother's face grew pale and was plastered in a cold sweat, the room was spinning, he couldn't keep still.

"...it's a very common shrub Tyler, but quite deadly."

" - Go to the ant, you sluggard; consider its ways and be wise! - Proverbs six verse six, slothfulness is frowned upon by the Lord."

His brother's body gave way, collapsing to the ground - dead.

An ear-splitting scream erupted from under the table, his aunt pushing over her chair, scampering to her feet in terror.

"Aunt Jane - the family slut. Don't think I don't know about you and father, or is it Tyler? Who knows these days?" said Adam, now buttering a croissant.

His sister was already on the floor, crawling to God knows where. She wouldn't get very far. His father began twitching uncontrollably in his seat, clutching his throat with utter desperation, attempting to breathe. His mother shrieked, patting him on his back with absolute panic.

"She lusted after the Assyrians who were nearby. They were governors and commanders in full dress. They were mounted horsemen, all of them desirable young men - Ezekiel 23 verse 12. God does not tolerate immoral desires of the flesh, Aunt Jane."

Jane spat vomit across the carpet, gripping her stomach in agonising pain. Ripping off half the tablecloth, shuddering into a ball on the floor.

"Father! We never were very close, were we - Who having become callous gave themselves up to lust, to work all uncleanness with greediness, Ephesians four verse 19. You, are a disgrace to my true father, you lack generosity in your heart. - For you, I chose snake venom, now you shall die like the serpent you truly are." His mother stumbled into a painting by the wall, holding her heart, nothing but terror in her face. His sister lay limply on the ground, her face covered in froth. "To my dearest sister ... A tranquil heart gives life to the flesh, but envy makes the bones rot. - Proverbs 14 verse 30. Always envious of others, never grateful for what t is you have. I left you with a bit of Azaleas; you won't die immediately, but it should be enough time to let you think about what you've done. Ask God for forgiveness, Darla." His uncle gobbled on a turkey leg; gnawing on its edges like the pig he was, oblivious to the surrounding horrors. "Uncle Jacob.... Be not among drunkards or among gluttonous eaters of meat, for the drunkard and the glutton will come to poverty, and slumber will clothe them with rags - Proverbs 23 verses 20 and 21. You feed your belly but leave your soul to starve." Uncle Jacob suddenly sprawled back in his chair; the bastard couldn't swallow anymore, blood dribbling from his eyes and ears. Adam pushed the remainder of his dinner aside, wiping crumbs off his mouth. He turned to his mother. "NO! PLEASE, NO!" she shouted. "I NEVER DID ANYTHING TO YOU... ." Adam laughed.

"Exactly. Pride goes before destruction and a haughty spirit before stumbling. Proverbs 16 verse 18. You're filled with too much pride to ever show love, but God loves you - He does!"

The dining room fell silent, the corpses of his family lay still. Adam pushed back his chair and strolled into the kitchen. Slowly, he rinsed his bowl, admiring the sunset in the garden.

His stomach churned, his headache blistered - it was excruciating. The muscles in his legs felt as if they were being stabbed repeatedly. The bowl fell to the ground smashing into pieces. He fell to his knees in prayer, tears in his eyes.

With his Bible in lap, and his rosemary tangled between his fingers - Adam had at last stopped praying.