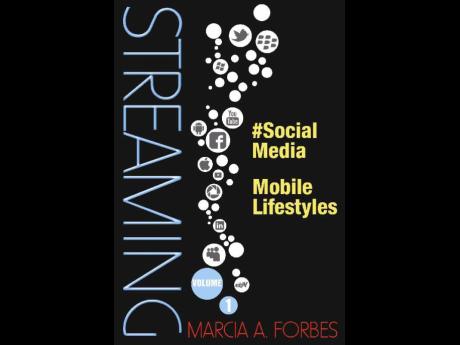 STREAMING: Volume 1; #Social Media, Mobile Lifestyles, written by Dr Marcia Forbes, artfully combines relevant and often humorous short stories to explain and support her research findings about what youths do online. Here 'online' refers to the Internet and cellphones. Hundreds of 17- to 30-year-olds from across four countries describe how they use Facebook and Twitter and what their mobile phone means to them. Dr Forbes' book gives deep insights into youth culture, the concept of mobility and the social ecologies of virtual spaces. It is available in hard-copy format in Jamaica and various eBook formats. Kindle version: http://amzn.to/ILciaf. ePub version: http://bit.ly/LlsmKk.

"I love Facebook. Yeah, pretty much, that's it." This urban-based, middle-class girl from one of Jamaica's preferred high schools was responding to the invitation, "Tell me your comments about the Internet."

Her "duh" implies that it's really a no-brainer.

Facebook is top of its type, so, what's not to love? However, just in case the researcher didn't get it, being that I am 'old' and likely out of the loop and not up-to-date on slang, she spells it out by following "duh" with "the obvious".

For her, having named Facebook, that was "pretty much … it" regarding the Internet, nothing more to be said, nothing else mattered. None of the other six girls in the focus group challenged her. She spoke their thoughts.

The rural-based teenaged girls who complained bitterly about inadequate access and lobbied hard for Internet access as a basic human right, recognised what one of them described as the "Facebook culture" and the importance of being on this network as one way of building social capital.

"You missing something that important to you. Going on the Internet, it's very interesting, worse on the Facebook."

In this instance, 'worse' means 'especially'. Another remarked, "Like say, if you no deh pon Facebook, you no have no sense, or dem suppen deh." [If you are not on Facebook, you are regarded as not having any sense or discriminated against in other ways].

Almost two-thirds (64 per cent) of 342 Jamaican youths surveyed said being on Facebook was their number-one online activity. Not surprisingly, this surpassed searching for information/conducting school-related research (at 51.5 per cent).

One guidance counsellor from an inner-city school complained about use of the computer lab: " … instead of doing work, they Facebook, most of them Facebook." … Notwithstanding their love for Facebook, many youths, in particular females, highlight the ways in which this social network steals their time and encroaches on schoolwork and other activities. Here are the views of some female focus group participants.

"It's a bit distracting 'cause sometimes I'm on the Internet to do my research and I find myself switching to go to Facebook to see what Ann post for her status, or sometime I go to fass on other people, honestly." ['Fass' is an expression used for nosey inquiry into other people's affairs]. {Lower middle-class 17-19-year-old female from rural parish}.

"Normally, me woulda deh out a me gate siddung with me friends them. When me have it, me no bother go out a door. Me just lie down and talk online." [Normally, I would be at my gate sitting with my friends, when I have it (Facebook), I do not bother to go outside, I just lie (down) and talk online]. {Inner-city 17-19-year-old Kingston resident}.