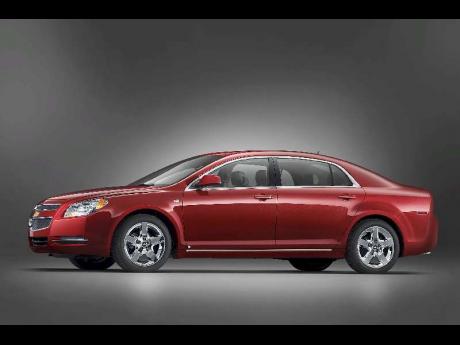 Chevrolet will no longer offer V-6 engines in its Malibu sedan. - Contributed

Thanks to government regulation and gas-price gyrations, the motors that move America's cars and trucks are shrinking.

Whether they drive hulking pick-ups or family sedans, Americans are increasingly choosing smaller engines that use less fuel, especially four-cylinder models that offer more horsepower than was possible just a few years ago.

More than half the new cars and trucks sold in the United States (US) through May 2012 had four-cylinder motors. That's up from 36 per cent in 2007 and it is the highest sales percentage since 1998, when the J.D. Power and Associates consulting firm started keeping track.

The government now requires automakers to build more fuel-efficient cars and trucks. Drivers are eager to save money on gas, which recently flirted with US$4 a gallon and is still pricey at an average of US$3.53. Also, people have embraced cars with downsized engines because new technology has made them just as fast as older cars with bigger motors.

Until recently, each engine type had dedicated fans. Decades ago, when gas was cheap, buyers usually went for bigger engines to get more power. Back then, noisy "fours" clattered down the highway inside compacts or wimpy mid-size cars. Some drivers complained that four-cylinder cars didn't have enough power to merge safely onto busy highways.

That began to change in the 1990s, when Honda and Toyota refined their fours, making them quieter and more powerful. In 2005, gas prices spiked after Hurricane Katrina knocked out refineries. The steeper prices made fuel-efficient cars more popular and forced Detroit's truck-obsessed automakers to spend more money improving their smaller engines.

Small engines got another boost in 2007, when the government began raising gas mileage minimums, eventually requiring new cars and trucks sold in the US to average 54.6 mpg by 2025. The shift toward smaller engines gathered more momentum in 2008, when gas spiked again - above US$4 a gallon.

Because of technology advances, many four-cylinder engines are more powerful than V-6s from only a few years ago. For example, today's Hyundai Sonata mid-size car has a 2.4-litre four with 198 horsepower, 45 more horses than the base V-6 in a 2006 Ford Taurus.

Mileage was important for Meagan Sherwood of Milan, Michigan, when she bought a new four-cylinder Hyundai Veloster. The property manager traded a V-6-powered Jeep Wrangler for the funky hatchback, which gets up to 32 mpg in city and highway driving. The Jeep, she says, got around 13.

"I was filling up twice a week on a 15-gallon tank with the Jeep," Sherwood said. "Now I fill up once a week with a 10-gallon tank."

Sherwood said she would only go back to a larger engine if she and her husband start a family and need more space.

Even as they become more powerful, smaller engines are helping lower gas consumption. So far this year, US consumption is down five per cent from the same period a year ago, according to government data.

The average new car goes about four miles farther on a gallon than in October 2007, said Michael Sivak, a research professor at the University of Michigan Transportation Research Institute.

In March, the average mileage of new cars hit a record 24.1 mpg, dropping slightly since then.

Four-cylinder engines averaged 26.4 mpg this model year, compared with an average of 16.1 mpg for eight-cylinders, Sivak said. If gas were at US$4, the average driver would save roughly US$1,300 a year by switching to a car with the smaller engine.

Hyundai was so confident in its four that it stopped offering a V-6 in the 2011 Sonata. Chevrolet and Ford are doing the same on the new Malibu and Fusion, which go on sale later this year.

In fact, eight out of 10 mid-size cars sold this year had four-cylinder engines, according to the Edmunds.com automotive website.

In the heyday of the muscle car, automakers tried to stuff the biggest engine they could into smaller cars. Now it's the opposite. Companies are putting smaller engines in larger vehicles, even in Ford's F-Series pickup truck, the nation's top-selling vehicle.