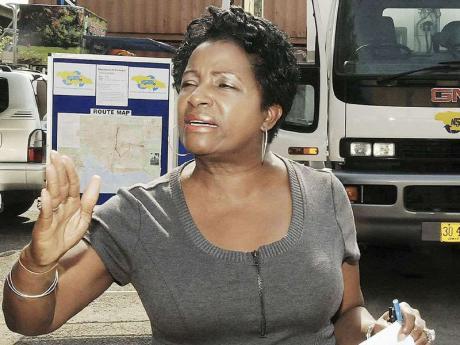 Wanna Enterprises Limited is targeting the commercial garbage collection market, which Gordon Webley says is worth more than the J$248 million in contracts collected annually by the NWSMA.

"The NWSMA's top collection was J$9 million when I went there, which we moved to $248 million after four years. I think the residential market will offer a similar amount. There are persons who are tired of unpredictable services."

The National Environment and Planning Agency (NEPA) indicates on its website that municipal waste in Jamaica amounts to 2,775 tonnes each day; ship-generated waste is 5,310 tonnes daily and industrial waste is 572 tonnes daily.

There is no data available for agricultural waste.

Approximately 20 per cent of the generated waste is handled by private collectors.

NEPA says that as much as 50 per cent of the solid waste generated in the country is attributed to the Kingston Metropolitan Area.

Approximately 80 per cent of the total waste generated nationwide is collected by five 'parks and markets' companies wholly owned by the Government.

The quality of service delivered by the state companies has been deteriorating because of budgetary constraints, according to NEPA.

Gordon-Webley says she is working with a group of investors whose names she declined to disclose, but who have provided start-up funds of J$5 million to launch Wanna's waste removal services in St Catherine, Kingston and St Andrew, St Ann, St James and Trelawny.

Wanna Enterprises is not a new company. It was first incorporated in 1985 but for which no annual returns are available since 1990, according to a search of Companies Office
records. The documentation also identifies Gordon-Webley, Glenmore
Webley and Joanna Brumley-Webley as partners in the
business.

The company, which is based at 11 Balmoral
Avenue in Kingston, also plans to offer street maintenance for
communities in need of a facelift, garden design and maintenance,
interior décor and janitorial services.

Wanna was
launched with a fleet of 25 trucks and while Gordon-Webley was not
precise about staff, she said she had a pool of "literally thousands" of
workers from which to recruit.

"I have started a
garbage-collection service which is open to persons who are tired of
ineffective garbage collection and do not want to keep garbage on their
property," she said.

"The service is specifically
geared for commercial users but it is also for anyone. We will also
collect old mattresses, refrigerators and anything for which removal is
required," she said.

The business will also offer a
yard and landscaping service as well as janitorial
services.

"We come to your home, look at your garden,
recommend a makeover if you wish, or otherwise we can resuscitate what
exists," she said. "We are prepared to clean and landscape streets with
packages which would be inexpensive to everyone."

The
solid-waste expert says that she has made the required applications to
the Office of the Contractor General and other government agencies in
order to secure government contracts for the company, including
streetside or roadside beautification.

Wanna
Enterprises will charge about J$2,500 per skip collected, which
Gordon-Webley says is "in keeping with what the State now charges
commercial and residential collection". But the price may vary according
to the package of services required, she said.

Wanna
is projected to break even by the second year of operation,
Gordon-Webley
said.