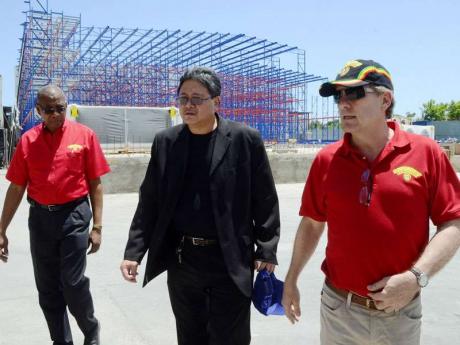 Agriculture Minister Roger Clarke plans to bring fish farmers and processors to the table to work out business deals in a push by Government to replace imports of tilapia with local produce.

Rainforest Seafoods, to which the plan was pitched, is signalling a willingness to talk to local fish farmers, but first wants assurance that supplies will be consistent and competitively priced.

"It is something we will most certainly look to explore but we need a guarantee of consistency. Right now the price is high because their (local farmers) cost is high so if they can bring their prices down we would be a willing participant to buy from them," said Rainforest Seafoods General Manager Ernest Grant.

Rainforest might be willing to buy more fish from local fish farmers when the expansion at the Slipe Road plant is complete in about three months, he said.

Clarke announced his plan at a tour of the new Rainforest plant last Tuesday.

Rainforest spent US$10 million - mostly funded by PanCaribbean Bank - to expand the facility from 5,000 square foot of production space to 36,000 square foot; and to outfit the plant with new machinery, including sausage-making equipment.

"When the new facility opens, we can take the fish and make other by-products. We can't do this now but when it opens we can use the scraps and ground it and mix it with binders and soy to make an affordable alternative such as a patty or so on," said Grant, who, in this instance, was speaking to Clarke's suggestion regarding the possibilities of incorporating tilapia in school-feeding programmes.

"It is something we can definitely explore."

Clarke said fish farmers have seen a 60 per cent decline in production, mostly due to loss of market share to competing imports, but that they have the capacity to ramp up production once orders begin to flow.

"The investment is there in terms of the ponds, the necessary skills; everything is there to grow the aquaculture industry but local aquaculture is suffering because the local farmers are not able to produce to compete with the imports," the minister said.

Rainforest Seafoods imports about 80 per cent of its supplies.

Grant said his company is import dependent because there is no consistent supply locally, and that only three types of fish are available in large quantities - parrot, snapper and butter.