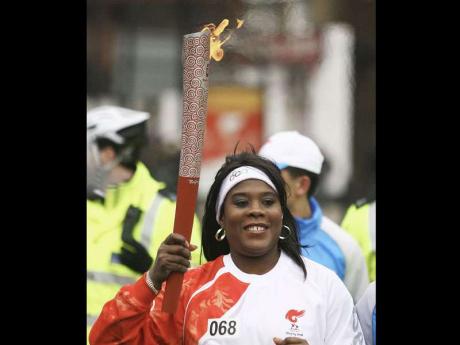 Former British Olympic javelin thrower Tessa Sanderson carries the Olympic torch during its relay journey across London on its way to the lighting of the Olympic cauldron at the O2 Arena in Greenwich. - Contributed

The deal will facilitate TVJs three-week coverage of the Olympics by having it broadcast live to channels reaching the United States, Africa, the Caribbean and other European countries.

The simulcast, titled London 2012: Pure Gold, will utilise BSkyB channels BEN TV and OH TV, which both have a 70-80 per cent penetration among British homes. It will feature special Jamaica-related Olympic-London programming daily throughout the entire Olympic period.

Gary Allen, the RJR Group's managing director, said the deal was a very special development for TVJ from many standpoints.

"The channels are very excited about the collaboration; Olympians we have met in London want to be involved in our coverage and businesses are seeing the opportunities of engaging with TVJ and reaching the UK, Europe, Africa the US-Tri States, 22 Caribbean countries and Jamaica."

"It is a massive reaching-out by TVJ in an area of activities that Jamaica and TVJ have excellent track records in."

OH TV already offers a diverse range of programming which mainly appeals to the African and Caribbean population, and is available to 7.8 million digital satellite subscribers and 17 million individuals in the UK alone. Similarly, BEN Television is accessible in 13 million homes worldwide and has four million viewers in the UK.

The simulcast will also be broadcast live through CaribVision to audiences in 23 Caribbean countries and in the New York Tri State areas.

As a result, London 2012: Pure Gold will also provide local advertisers with opportunities to reach new target markets abroad as advertisers will be able to choose the regions in which they want their advertisements to run.

As part of the simulcast, which will begin on July 23, at 7:30 a.m., Yvonne Chin and former Olympian Tessa Sanderson will give live commentary from London alongside other analysts. They will communicate via satellite feed with Neville Bell, fellow Smile Jamaica host and sports reporter, and analysts Bruce James, David Riley and Earl Bailey.