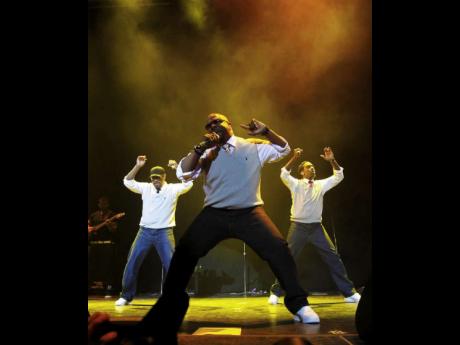 In this July 1, 2011 file photo, Boyz II Men, from left, Nathan Morris, Wanya Morris and Shawn Stockman perform at the 2011 Essence Music Festival in New Orleans. The group is preparing to celebrate their milestone anniversary this fall with a new album, including reworked versions of their now-classic hits. - File

Last year he had on training wheels, but this year Christopher Roberts has launched out on his own to host Groovin In The Park that will be held in Queens, New York, on July 1.

Roberts, the owner of a popular Jamaican restaurant in New York called The Door, noted that he had to change the name of the show because it was owned by both parties. He added that hosting the event with Irie Jam Media Group was his first major shot at hosting a big event.

However, this year he has decided to take on the mammoth task of doing the show on his own at the same location.

Not only is he confident of his competence but he also believes he has a strong team.

"We have a good team with experienced people in all the different areas," he said.

Roberts also lauded his former partner, who hosted Irie Jamboree for several years, for the tutelage he received.

"This time around we think we have gained a lot of experience. We learnt a lot from our partners," he told The Sunday Gleaner.

Meanwhile, Roberts says preparations for the show have been going well, with only a couple weeks until the event takes place. Promotion is also in high gear, he says.

With some renowned, mature acts in reggae and R&B, he is also pleased with the line-up that includes Boyz II Men, Jimmy Cliff, Beres Hammond, Beenie Man and Gladys Knight, who replaced R. Kelly.

Despite their popularity, Roberts explained that it was not a difficult process to get the artistes on the show.

"Getting the acts really depends on your agent. It wasn't very difficult because our agent really worked hard," he said.

As it relates to the fact that R Kelly will not be on the show, Roberts says Gladys Knight is a strong replacement and is likely to add a different element to the event.

"R Kelly has his fans who were anticipating seeing him in the park but I think Gladys Knight is a suitable replacement, and she will also pull another demographic," he told The Sunday Gleaner.

With a mix of reggae and R&B, Roberts says the audience is in for a treat, as the two genres are a natural blend.

"The response is tremendous and the response is growing daily. Our audience is really appreciative of the blend and the calibre of artistes that we bring to the Queens community. My expectation is for our audience to experience a very organised and well-produced event; something that they will walk away remembering," he said.