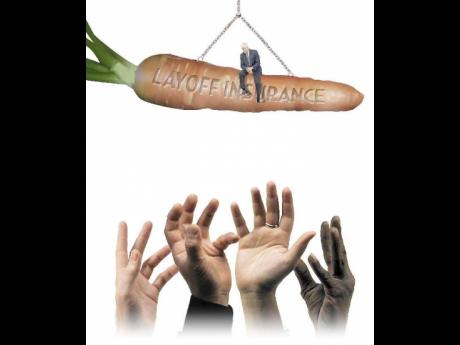 Imagine a corporation where the CEOs and senior executives can remain in office until they are carted out in wheelchairs, wrinkled, toothless and in advanced stage of dementia as they reach three score and 30. Then picture them having to work only 10 years in order to qualify for a pension equal to the salary of the person who currently occupies the post, and that salary and pension dancing in unison as both rise as constantly as the price of gas.

Add to that the shareholders not being given the right to make a decision to improve their own pension benefits, and bet you that you all would say, "Scandalous!" My two (US) cents on the current crisis in this new pension saga is that it might be convenient to once again blame the International Monetary Fund (IMF), which historically has been anti-worker and anti-social protection.

However, the challenge of illegally changing the terms and conditions of public-sector workers' contracts to suit the economic expedience of the Government is not about being able to conclude an agreement with the IMF. Rather, it is what is right and just.

Asked to advise on suggested changes in the pension provision for public employees, including a five per cent contributory rate and an increase in the retirement age to 65, the Attorney General's Chambers (AGC) responded that it was a breach of the workers' contracts of employment, and unconstitutional. Obviously, the committee proposing the changes was saving its grey matter, because the AGC's advice is a no-brainer, although some members disagree.

It is difficult to understand how a lawyer, who must believe that the 'law is an ass', wholeheartedly supports the idea that the AGC's advice is unsound. Senator Arthur Williams, perhaps influenced by the events of 2009-2010, when the same chambers advised the justice minister not to sign the Dudus extradition order, now wishes to discard the AGC's opinion in favour of that of a senior lawyer, a yet-unnamed Queen's Counsel. A word to lawyer Williams, who is my good friend: it doesn't matter what the private-practice lawyers say; it is the advice of the AGC which matters.

What is so strange is that the Opposition, which started the pension-reform issue, somehow thinks that it is acceptable in law to unilaterally breach a contract. Any first-semester law student, and even those studying CAPE law in high school, know that if a contract is broken by one side, the violated party can consider it to be at an end and seek damages.

A contract is one of the most sacred pieces of agreement which parties can establish between or among themselves. This was the very point made when the Special Constabulary Force Association took the Government to court to prove that the payment of the seven per cent which the Government was determined not to honour was a legally binding contractual provision. So, somebody is either playing dumb or not playing at all.

Yet, this recent stalemate is not a fresh issue, and it points to a consistent approach by governments over the years to squeeze as much out of public-sector workers as possible, while giving them the minimum. In 1962, Section 133 of the Constitution declared that pensions should "be charged on and paid out of the Consolidated Fund". This clearly put a fundamental obligation on the part of the Government.

Historically, Government has turned its back on the working class and dragged its feet in enacting laws to protect the poor, including its own workers. Finally, in 1965, incorporating the Sugar Workers' Pension Scheme, the National Insurance (NIS) Act was passed. Given effect three days after Tom Fool's Day in April 1966, the act cleverly was structured to not pay the majority of Jamaicans any of the benefits to which they were entitled. For men who attained retirement age, the earliest age that they could claim an old-age pension was and still is 65. For women, the age is 60.

Left in the cold

In 1965, the average life expectancy was just over 68 years, with men living, on the average, five years fewer than women. Thus, the number of beneficiaries would have been relatively small. Nonetheless, as minuscule as the benefits were, a People's National Party (PNP) headed by Norman Manley opposed the introduction of the NIS.

A Jamaica Labour Party (JLP) government, trying to pick up the pieces of its shortcomings and failure to help the working class, hurriedly pushed forward a Termination of Employment Bill in 1971. Although it was not passed until 1974 after the PNP took over, it is a masterpiece of collaboration and collusion. In Section 2 of the act, it states that public-sector workers are exempt from the provisions, as "'employee' means an individual who has entered into or works ... under a contract with an employer ... but does not include ... any person employed by the Government ... ." Therefore, all those Jamaican government workers who are terminated for redundancy are left out in the cold.

Pile this on top of the Holiday With Pay Order
of 1973. This statute should have been enacted shortly after the Holiday
with Pay Act was passed in 1947. However, successive JLP and PNP
administrations, which rode into Parliament on the backs of Jamaican
workers, ignored it like snot on the face of a keynote speaker. A common
argument is that government workers receive more vacation and sick
leave than the average employee in the private sector, and also get
departmental leave. True, but a major difference is that the Government
puts in a clause which protects itself in the event of its own
insensitivity or negligence. In the private sector, workers can
accumulate vacation leave ad infinitum. Government
employees, on the other hand, have to get special permission to save
vacation days beyond three years, and the Government is not bound to
compound if it does grant approval.

A dumb pseudo-economic pretext which is
based on a misguided laissez-faire economic model assumes that the
protection of Jamaican workers and the achievement of economic
objectives are incompatible goals. On the contrary, studies done by the
International Labour Organisation in the 1970s and '80s, numerous papers
presented at the International Industrial Relations Association in 2002
and independent local studies done by Noel Cowell and myself, show that
workers who have and feel that they have high levels of worker
protection and a stake in the enterprise and country have higher levels
of productivity than their counterparts. Thus, protecting workers'
terminal benefits makes economic sense.

In 2002, a
study I did for the ILO pointed to the advantage Barbados had in having a
severance payment and an unemployment fund, and out of that the
suggestion was made in several forums and to prominent trade unions that
worker-resistive pension and termination benefits reform should be
placed on the agenda.

Nevertheless, there is a
loophole that was created by, ironically, the most worker-oriented prime
minister in Jamaica's history. Clearly demonstrating that the Michael
Manley of 1976-1980 was a less worker-focused leader than the Manley of
1972-1975, the PNP administration created the Staff Orders for the
Public Service in 1976. Section 1.1 of the Orders makes it clear that
nothing in them should be construed to imply a contract between the
Government and its employees. It is an awful disclaimer, and I hope
nobody tries to use it.

Try as you may, the AG gave
the right advice, and like the JLP in 2009, this PNP administration must
be forced to put the Jamaican people first and understand that laws to
protect Jamaican workers are supreme and are, indeed, a
shackle.