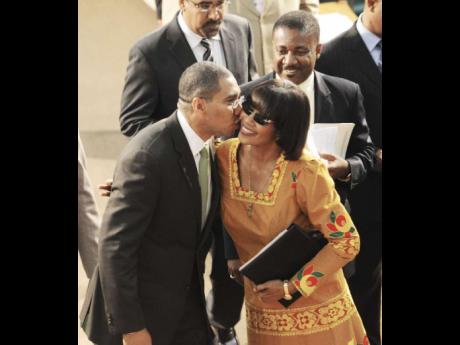 Ian Boyne posits that national unity is crucial to getting Jamaica over the many socio-economic humps ahead, and Prime Minister Portia Simpson Miller and Opposition Leader Andrew Holness are key to such success. - Ricardo Makyn/Staff Photographer

The sweltering, agonisingly punishing heat in the country will soon be accompanied by an even more intense inflationary heat, as the price increases from the recent Budget begin to bite unsparingly. It will feel hotter than Brian Wynter's 10-12 per cent inflation projection.

Already, government spokesperson Sandrea Falconer is bawling about price gouging from retailers, threatening to "name and shame" offenders. But people are going to be hit with a whole range of increases that they can't report to any Consumer Affairs Commission. When your plumber, electrician, mechanic, hairdresser, computer technician, doctor, lawyer raise fees, can you run to Ms Falconer? You will just have to 'hug it up', for everybody will be increasing his prices.

It is going to be dread. And many organisations which are accustomed to helping the poor are going to be having a hard time for the now much-despised waivers, of which they used to be beneficiaries, are increasingly being frowned on. The poor and lower middle class are going to get hit from all angles. And keep in mind, too, that it is not only Austerity Apostle Peter's Budget which will be savaging your living standards.

There are some very dark storm clouds over the global economy. Things are worsening in Europe. This week's Newsweek has a cover story on 'Europe's Lehman Brothers Moment: The Gathering Eurostorm', recalling that catalytic event which marked the official start of the Great Recession of 2008. Greece, Spain, Italy, Portugal and Ireland are in serious trouble.

"Something is very wrong with the world economy," the Economist announces in its June 9 editorial. "That something is a combination of faltering growth and a rising risk of financial catastrophies. Economies are weakening across the globe." Even the new stars in the economic galaxy are dimming. Brazil's GDP is growing slower than Japan's, and India's growth has slackened, while China's slowdown is intensifying. "A global recovery that falters too soon after the previous recession points towards a widespread Japan-style stagnation," says the Economist in its editorial.

In Jamaica, we are not paying enough attention to global realities and have a very parochial approach to our problems. Ralston Hyman is almost alone in trying to educate our people about what is happening in the world and how that affects us. Whatever you want to say about him, it can't reasonably be denied that he has brought a knowledge base and a scholarly appreciation to financial journalism that is unparalleled in Jamaica. The country desperately needs economic literacy. We need to understand how interest-rate changes in the United States affect our debt obligations and fiscal accounts and how developments in Europe affect our balance of payments and prospects for export growth.

With all the chirpy talk about growth prospects from the Government, has anyone given us a realistic assessment of how developments in Europe, America and the emerging markets are likely to affect our growth projections? We still have this insular approach to economic matters and the political parties seem content in trading blame for "wrecking the economy". Like the reckless talk we had from the Government in the recent Budget Debate about the JLP's wrecking the economy, leaving this present administration with the task of "repairing it". Well, good luck to them.

What we need urgently is both a national unity and a national economic-literacy campaign. This campaign has to be led by civil society, with a strong input from the most powerful players in the private sector. Oliver Clarke, Butch Stewart, Billy McConnell, the Hendricksons, Joseph M. Matalon, Gassan Azan and others, along with key stakeholders in civil society, including the Media Association, need to sit the leaders of the two political parties in a room to hammer out an agreement on certain common positions. And they need to get private-sector players not to exploit the crisis.

The social partnership talks have to resume and take on a force like never before. Do this for Jamaica 50. It's
a matter of survival. I don't know whether we grasp the magnitude of
the challenges which face us and the kind of hopelessness and despair
people are going to be experiencing in a couple of months as this fiscal
consolidation sinks in. Only a strong sense of national unity and
purpose, a common vision and a sense that there is no alternative can
galvanise us.

National unity has become a cliché. We
have to take it beyond that. We have to live and breathe it. This is our
last chance. If we don't get it right this time, I fear we will lose it
forever. I hate to sound apocalyptic. But the times demand it.
Fortunately, I think we have a firmer basis for this political consensus
on some critical issues now than we ever had in the past. There is no
sharp ideological divide between the political
parties.

In fact, it was very interesting in this last
Budget Debate to notice how the PNP was commandeering the JLP's fiscal
discipline, fiscal prudence, tight-management mantra, while both Audley
and, particularly, Andrew Holness made the case for social protection.
Very interesting. So now it's not even a matter of one arguing for
fiscal consolidation and tight debt management, while the other is
talking about protecting the poor. Both are talking about both debt and
fiscal management and protecting the poor.

Some
behind-the-scenes diplomacy should take place, principally led by our
most powerful business moguls, to have the parties tone down the
rhetoric and resist the temptation to propagandise, in the national
interest. This should not be hard, for I have every confidence in Andrew
Holness as a responsible, patriotic, sober, level-headed and
forward-thinking opposition leader. Andrew has a keen sense of the
crisis the country faces and the tough decisions which have to be taken.
His finely crafted and effectively delivered Budget presentation gave
every indication of that.

The partisans will be
telling him, "Nuh bother help Portia. She fight fi de power; now mek
everything tun up pon har." They will urge him to exploit every bit of
the crisis until the people are begging back for him. But I don't
believe Andrew Holness is motivated by the acquisition of power, no more
than I believe Portia is. I believe both are sincere and absolutely
committed to the upliftment of the Jamaican people. Sure, the political
contests will continue. But there are some overarching goals which
should unite them.

After all, as Andrew himself has
acknowledged, it's the same International Monetary Fund-sanctioned
Jamaica Labour Party programmes the PNP Government is following. In
fact, even the three stellar mega projects they are depending on to
produce growth are carryovers from the JLP administration. Apart from
some slight modifications, this Budget could well have been pre-sented
by the JLP. The party says it would not tax any basic foods - and it is
regrettable the PNP did - but the JLP might have been forced to do the
same for sheer necessity. I believe every pained word of Portia Simpson
Miller when she said she and her Cabinet colleagues sweated and felt
anguish when they considered taxing basic
goods.

I have
never believed this nonsense about 'wicked government' causing pain. I
did not believe it when Portia so propagandistically charged the Golding
government, and I don't believe it now.

The
Opposition has already backed a public-sector wage freeze and is
publicly in favour of public servants contributing to their own
pensions. They have not made any irresponsible calls for demonstrations
against increases on basic foods and electricity. We don't give enough
credit to our politicians. The level of consensus we have achieved on
the economy is noteworthy. (Mark you, I continue to maintain their
economic prescriptions are necessary, but not
sufficient.)

I believe the Media Association should
lead a national campaign to increase Jamaicans' economic literacy and to
educate the country about our economic situation and options. I believe
our media practitioners must do some more reading and join Ralston
Hyman in educating the nation about what is happening in global markets
and how that affects us. I believe our technocrats, too, must be on the
cutting edge of know-ledge and must be scouring the best sources of
information on economic development and trends and must bring a high
level of sophistication in negotiating with the
IMF.

Technocrats at the Ministry of Finance must be
monitoring the IMF website every day, assessing every speech given by
Managing Director Christine Lagarde. She gave a most interesting and
quotable one last Tuesday. Addressing a forum organised by the
progressive Centre for Global Development, headed by that intellectually
sharp development economist Nancy Birdsall, Lagarde said,
"Jobs must be at the forefront of any strategy for inclusive
growth. Decent and steady employment is the sure foundation for human
dig-nity ... ." This is significant coming from the head of a
Washington Consensus multilateral which has traditionally put inflation
targeting ahead of employment targeting.

She
continued: "Developing countries, too, need to allocate public
spending on social safety nets. In these countries, social safety nets
might be all that stands between survival and catastrophe."
Our technocrats need to be quoting back these words to some of the
lower-level staff they are negotiating with. We must be able to match
these multilateral fellows intellectually and craft an IMF programme the
least inhospitable to our people and
growth.

Noteworthy is the fact that the IMF chief
said, "Now the IMF needs more resources for concessional
lending to help vulnerable countries navigate an increasingly volatile
world. This is one of my top priorities." So much for those
economic illiterates who think that any talk of concessional financing
for developing countries is just mendicancy and Third World cap in
hand.

Lagarde knows countries need this. But this
can't be confined to low-income countries but must include heavily
indebted countries like ours, hence the rationality of A.J. Nicholson's
call for us to be considered for special
concessions.

For our children - as well as our own
survival - let us have a national campaign around some common
goals.

Ian Boyne, a veteran journalist, is the
2010-11 winner of the Morris Cargill Award for Opinion Journalism. Email
feedback to columns@gleanerjm.com and
ianboyne1@yahoo.com.