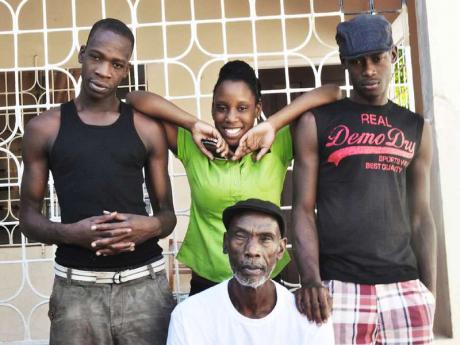 Barrington Matthews (front) with three of the children he grew without a mother: Chad (left), Ebony and Ronno. - Chadwyck Vassell/ Photographer

For 18 years, Barrington Matthews, was both mother and father to his daughter and three sons who lived with him after his common-law spouse walked out on the family.

Matthews regretted her leaving, but harboured no ill will against her. In fact, after an extended absence, she turned up to visit the children in January, and Matthews accepted her with grace.

According to Matthews, while he could accuse his former common-law spouse of absconding, he would not blame her as things were tough at the time and she was his junior by several years.

"I have a way to describe myself - 'Pama'," Matthews told The Sunday Gleaner with a chuckle. "Part mother and part father," he explained as the laughter lingered.

But it hasn't been all fun and games for the father of nine.

Even though he embraced the role of Pama with both hands, that is not what Matthews desired. But necessity is the mother, and in Matthews' case, father of invention.

Despite the challenges of being a single father, Matthews doesn't think his children are worse off for it. He believes it has taught them to be self-sufficient.

The self-proclaimed Pama said his friends have given him gifts on Mother's Day. "About three times me get Mother's day gift … . Even women in the community acknowledge me on Mother's Day," he said with a chuckle.

Adorein Pommells, a proprietor and a member of the Maverley community for more than three decades, agreed that Matthews has been an exemplary dad.

"He is a good father. He has been both mother and father to his children," she said.

Times were rough and tough but he stood by his four children through thick and thin.

Today, all four have grown into productive citizens, with three still living with him in St Andrew.

At the time their mother left, the eldest son was 14 years old. He is now 32 and a journalist.

His other sons - Ronno and Chad - were seven and two years old, respectively.

Ronno is now a HEART Trust-certified welder and Chad teaches at a primary and junior high.

His only daughter - Ebony - is 22 years old. She owns and operates a cosmetology business.

Matthews recalls having to do everything for the four children, including combing Ebony's hair.

"I washed, cooked, and cleaned. I taught them maths, English and geography ... anything they wanted. I even built kites and played 'gig'," said the retired seaman who still fancies himself as one of the best gig players in town.

"I tried combing (my daughter's) hair yes … did a lot of medicine work and always go to the clinic. Many times, I was the only father at the clinic or at the parent-teacher meeting, so me get known for that," he said.

Matthews recalled that his popularity at the medical clinic would often result in him getting favours from the staff.

Help from his mother

The seafarer said his mother lived on the same property with him and the children and she lent a helping hand, especially when he was away.

His mother also took the lead role in dealing with some of the more feminine issues that confronted Ebony.

But Matthews never shirked his responsibilities.

"My mother was nearby, so she gave an eye out for me, but as for pressing them uniforms and washing them clothes, me do that," he said proudly.

The now-retired 63-year-old was a research vessel master while he worked with the Ministry of Agriculture and Fisheries for many years.

He was one of the first students of the Jamaica Maritime Training Institute, now known as the Caribbean Maritime Institute.

When he decided to apply to the Maritime Training Institute, Matthews had never been to sea before, but the sound of the waves captured his interest.

It has been four years since he retired and with his children now grown, Matthews takes on freelance jobs to pilot vessels.

He has travelled to many places around the world - the names of some of them are not known by many Jamaicans - but Matthews' greatest accomplishment might be his children.

He told our news team that he has mastered vessels to America about 30 times. He was sent to South Korea to study their fisheries system.

Several countries in South America and England are also numbered among his voyages. But, there still remains one place the veteran seafarer wants to visit. "Me nuh touch Africa yet. I want to see what Africa looks like," said Matthews who has embraced the Rastafarian philosophy.

His love for Africa heavily influenced the names he chose for his children.

"Right now, me ah di talk of the place because of my political views and how me raise my kids," said Maverley's pre-eminent 'Pama'.