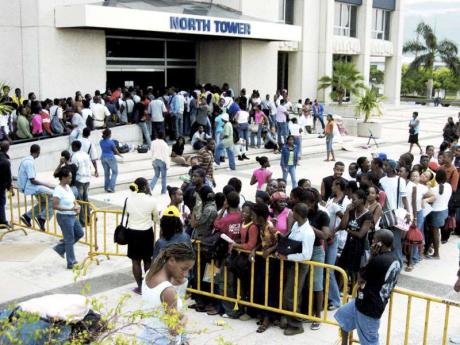 Applicants for students loan outside the Students' Loan Bureau offices in New Kingston in this April 2005 photo.- File

Three years after former prime minister Bruce Golding indicated his desire to introduce a programme to influence the Students' Loan Bureau (SLB) to offer loans at special interest rates for certain areas of study, the Government seems ready to go that route.

Golding, who was speaking in the 2009 Budget Debate, made the proposal against the background of a glut of persons studying in some disciplines while there was a chronic shortage of persons being trained in others.

With not much having changed since then, Education Minister Ronald Thwaites last week told The Sunday Gleaner that a huge mismatch exists which has to be balanced.

He said the Government will begin to move in the direction of target financing in the 2012-2013 academic year especially for teachers in state-run institutions who are granted study leave.

"It is not an articulated policy, but it certainly is going to be imposed in practice. We have never fully matched financial aid with workforce needs ... when you have a lot of money you can support people with all their ambition but when you are short, and we are, you have to be more focused," stated Thwaites.

A recent manpower gap analysis conducted by the HEART Trust/NTA highlighted that Jamaica needs professionals in several areas while some professions had more trained persons that jobs.

According to Thwaites, this is an imbalance that must be corrected.

"It becomes more acute, with respect to the teachers. We encourage our teachers, always, to upgrade their qualifications. But it does not make sense that we are funding a teacher for graduate degree(s) in an area that he or she is not practising," said Thwaites.

"The direction that the education ministry is now heading, is that, if we are going to assist you, whether it is by leave or other means, you have to qualify yourself in the area in which you are going to be most useful."

University of Technology (UTech) administrator and public commentator Martin Henry agrees that the State needs to help push persons into areas of study which are most needed in the country.

"I think the Government should put the State's money behind the labour needs analysis as the HEART Trust gap analysis seems to be indicating," Henry told The Sunday Gleaner.

According to Henry, a graduated system could be developed, offering 100 per cent financial support to students who are doing courses in areas which the country most need while persons doing other courses would receive a lower level of financial support.

He noted that there is a chronic need for trained pharmacists but UTech is unable to train more than 60, because of limited lab space.

"Pharmacists are guaranteed space in both public and private service and the export capacity is also present," said Henry.

The university administrator notes that nearly 40 per cent of all applicants to UTech are seeking to pursue studies in business administration while indications are that there are better employment prospects in pharmacology and information, communication and technology.

"I believe that preferential loans and rates should be given to specific areas, for example studies in pharmacology.

"And we have to agree as a government and opposition, and legislate if necessary that, the budget for education must not fall below a certain level," said Dalrymple-Philibert.

In the meantime, the SLB, which offers loans and grants to qualified students at the tertiary level, has said it is not averse to any suggestion or policy that will allow it to better serve the public.

"We have not taken any decision to prioritise, but we are also aware of the statement made by then Prime Minister Golding. We are in the process of having discussions as to what avenues we can take, if any, where that is concerned," said Analisa Downes, public relations officer at the SLB.