Bootleg is back! Fake rum competes for $millions in the market 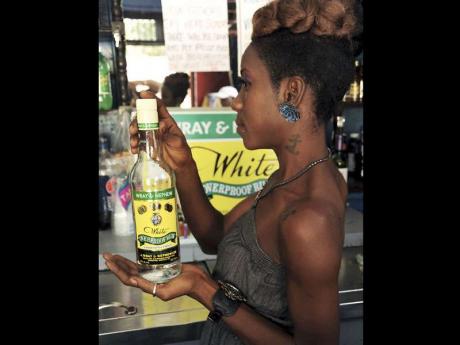 Rum, produced in unsanitary conditions, bottled in used discarded branded containers, and resealed with glue, has made its way into the hands of unsuspecting consumers at highly competitive prices.

A trade in counterfeit Wray & Nephew products, mainly white overproof rum and Appleton, has exploded across the island, pulling millions of dollars from the formal system.

Over the past three months, The Sunday Gleaner has found the bootleg rum widely available, particularly in bars, shops and wholesales in downtown Kingston and other parts of the Corporate Area.

Last Thursday, one operator of a wholesale in Parade was arrested by members of the police Organised Crime Investigation Division (OCID) and at least six boxes of suspected bootleg rum seized.

According to the police, the boxes were labelled Wray & Nephew White Overproof Rum, but the seals on the content were misplaced and batch numbers were inconsistent.

Suchang Lin, the owner of the store, was arrested in connection with the find.

This is one of several operations carried on by members of OCID in recent weeks as they intensify efforts to break the back of the trade which is robbing the Government of millions of dollars in taxes.

The Sunday Gleaner's team found that the fraudsters are selling the bootleg rum at a fraction of the cost of the J. Wray & Nephew product and bars, shops, wholesalers and other entities are grabbing it up.

However, these entities sell to their customers at the regular price and it is not yet clear what health risks are faced by unsuspecting consumers.

Wray & Nephew was asked by The Sunday Gleaner to test a bottle of the bootleg rum, and while it confirmed that the product in a bottle labelled with its name was not at the required standard, it did not say how this could affect the consumer.

But there have been several complaints of diarrhoea and other complaints from persons who have consumed this fake brew.

"The sample tested did not show the chemical or sensory properties of Wray & Nephew products, as the sample tested failed (our) evaluation and did not match our speculations," said the company.

However, the company did not say how consumers could know when they were being served this "bad rum" which The Sunday Gleaner found readily available across the Corporate Area.

The rum is bottled similar to the original product from J. Wray & Nephew, including the security features implemented by the company and with no obvious difference to the naked eye.

Three major players in the bootleg rum business were identified across the Corporate Area, although their bases of operation remain a mystery.

In one instance, our news team was taken to premises where more than 100 cases of the bootleg rum were being stored.

The rum was in boxes marked Wray & Nephew, with the only indication that it was bootleg being the price.

Following the increased tax on overproof white rum announced by Finance Minister Dr Peter Phillips recently, the bootleggers increased their price to between $800 and $900 while the Wray & Nephew product moved to approximately $1,200.

To get the bootleg rum from the source, prospective purchasers have to travel to middlemen who make a phone call to order the product.

After the order is made, a 'scout' - usually a child - travels to the area to ensure that it is safe to make the delivery.

If nothing suspicious is seen, the rum is then delivered and the cash collected.

A conservative estimate has put the trade at $100 million annually with industry insiders saying it is becoming more organised and sophisticated.

However, Major Hugh Blake, corporate risk manager of the Lascelles Group which includes Wray & Nephew, told The Sunday Gleaner that the counterfeit trade has been dented in recent years with as much as 90 per cent of the rum in the market being from legitimate producers.

According to Blake, the major players in the illicit trade have been taken out of commission but because the demand for Wray & Nephew White Overproof Rum is high, it attracts counterfeiters.

Blake said the company will be stepping up its vigilance to deal with the counterfeit market and will work closely with state agencies to go after the operators.

Blake lauded the Revenue Protection Division (RPD) of the Ministry of Finance and OCID for putting a significant dent in the illicit trade.

He is also appealing to businesses not to buy from the illegitimate suppliers despite the higher profit margin they enjoy by buying at the lower price and selling at the regular price.

You could be getting bad Wray & Nephew rum if ...