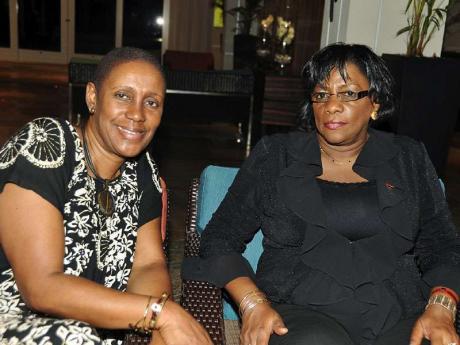 Marlene Coudray's eyes showed a glimmer of hope, but her body language told the story her eyes sought to conceal.

Coudray looked like a person anxious for closure; a fearful and pensive mother thirsty for a lead into the disappearance of her firstborn, Michelle Coudray-Greaves.

Last Thursday, the mayor of San Fernando in Trinidad, gave The Sunday Gleaner access to her temporary inner sanctum at the Hilton Rose Hall Resort and Spa in Montego Bay, St James, and spoke of her daughter's undying love for Jamaica.

"This is the first time that I have eaten a real meal since my daughter's disappearance," Coudray revealed.

Earlier that day, she had viewed what many persons suspect are the burnt remains of her 39-year-old daughter, who has been missing since June 1.

While the burnt body found in a cane field at Barnett in Montego Bay last Monday may be her daughter's, there is no reason to stop hoping.

"I still have to have hope, she is still missing until the test results are in," she stated with uncertain optimism.

Coudray recalls and speaks fondly of hugging the "healthy, happy and always full of life" Michelle on May 29 in her living room in St Madeleine, Trinidad.

Fifteen days later, she is in a morgue in Montego Bay, trying to identify the remains, but a conclusive determination will not be made until blood tests and dental checks are done.

"We won't know anything definitive until the test results come back either tomorrow (Monday) or Tuesday," she confided.

"It was difficult to make the decision to do the viewing; it was like an out-of-body experience, I was numbed," said Coudray as the inner pain seeped into her facial expression.

Having defied the advice of family members not to look at what may be the remains of her daughter, she said, "I needed some type of closure, I was compelled to look. I couldn't go back to Trinidad not seeing, I couldn't live with that."

Like most families who have lost relatives to the undying charm of Jamaica, the grandmother of three says she is still trying to decipher what it is about this country that caused her daughter to give up a relatively good life in Trinidad to live here.

"She always said her health was better here, and since she had medical challenges it never made sense to argue."

Arguing would probably not have helped anyway, as Michelle "was a little stubborn".

"Once Michelle made up her mind, that was it. We have tried to keep her in Trinidad, where she could have had a better life, but she loved Jamaica."

Coudray's pain is not isolated. Her three grandchildren, aged 11, seven and five years; her husband Larry Achong, and other daughter are devastated by the uncertainty.

"We told the children their mom was missing; the older of the three has not taken it well at all," she confided, adding that her husband remains in shock and disbelief.

Deep down, the surreal circumstances have started to sink in, she said, as the days passed and there was no news about Michelle.

Asked if she felt the issue could affect Jamaican-Trinidadian relationships, Coudray responded with a resounding "No". "We have established some good relationships with Jamaica.

As difficult and sad as her trip to Jamaica has been, Coudray has been bolstered by the kind words and reflective session with the principal and teachers at Cornwall College, where her daughter taught French.

When she spoke of the professionalism of the Jamaican police her eyes lit up.

Her comments were cemented by Dr Gloudon, who has been hosting the San Fernando mayor during her stay here.

"I have done everything I can to make the passage easier," said Gloudon.

Noting that the circumstances were horrible, Gloudon said they could not have wanted any better treatment from the Jamaican police. "They are extraordinary," she stated, naming persons such as Commandant James T. Golding, Assistant Commissioner Devon Watkiss and others.