How Melvis made it! Surviving in a dying sector 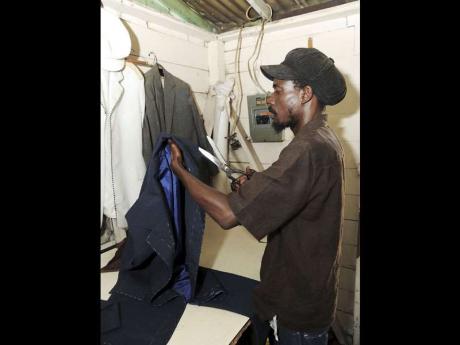 For many Jamaicans, it is easier to walk into a department store to purchase ready-made garments than to have them custom-made. Tailors and dressmakers have almost disappeared from local communities, making way for millions of dollars in imported apparel of various kinds.

But for Melvis Morgan, who is regarded as one of the finest tailors in Maverley, there is still room for custom-made clothing and space for a resurgence of the profession.

A recently concluded labour analysis study by the HEART Trust/NTA seems to agree with Morgan.

Even with the current levels of imported wear, the Jamaican economy can accommodate many more tailors and dressmakers, but only few persons see these professions as anoption.

New persons entering the apparel sector seem to be interested in designing clothes rather than constructing them. Dressmakers in particular, according to the study, are also in very short supply.

"The demand is there. People call us from time to time trying to get people to sew. What we find though, the appeal tends to be greater for designers among applicants," said Audrey Toussaint, head of the GARMEX academy. GARMEX, the national academy run by HEART which trains professionals in the clothing and textile industry, can take 50 per cent more than its current cohort.

Without more constructors like Morgan in the garment industry, the heavy dependence on imported wear will remain.

Morgan's survival in the inner-city community of Maverley largely has do with the high quality of his work and his relationship with his customers.

Operating his business from his modest space in the community, which also doubles as his domestic area, he bemoans the fact that most of his clients are low-income earners, on whom his business depends.

"I started in 1981-82 as a young boy. A tailor in the community ask me to press a pants for him and I told him that I did not know how to do it. He gave me a big old tailor iron (with the coal inside) and show me how to 'catch' a seam," said Morgan.

He started ironing to earn lunch money to continue school at Maverley All-Age, but he still dropped out in grade eight. He never once thought about doing anything illegal to sustain himself.

A tailor gave him a break when he showed him how to make a 'side pocket', but it was when he learnt to make a 'back pocket' that tailoring took off for him. He would get further practice when the tailor was sleeping.

Before long, he made a pair of trousers for himself.

"People started to praise me and tell me it looked good, and then I start getting work, while I was working for people," he said.

Nearly 30 years later, he has honed his skills, but still has no certification.

"That hit me when former labour minister Pearnel Charles said thousands of people were looking work but they had no certification," he recalled.

He approached HEART, through GARMEX, but was seven points short of the required marks for mathematics. He made the English requirement and has since returned to school to study mathematics.

Morgan is a right fit for the programmes being offered by HEART.

Heart Executive Director Carolyn Hayle, said, "We would put individuals through entrepreneurial training so they can employ others for small operations."

Morgan has set his sights on GARMEX training, and also overseas.

"Eventually, I would love to source my own raw materials, and the tourism industry. Hotels always need people to sew tablecloths and drapes. If you are good, there will always be work," he said.

In the meantime, for a fee between $7,000 and $9,000, man, woman and child could be properly suited by Morgan's deft hands at his machines.