New search for heir to the throne 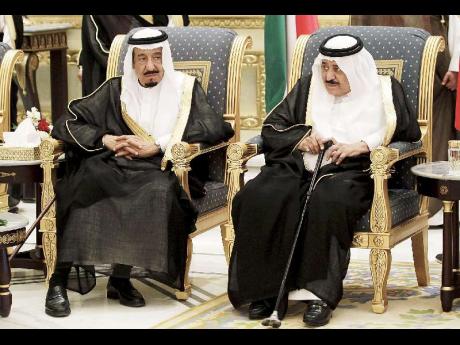 In this Monday, May 14 file photo are Nayef bin Abdul-Aziz (right), and the man now likely to succeed him as Crown Prince, Salman bin Abdul-Aziz.

Saudi Arabia is still reeling from the death of Crown Prince Nayef, the hard-line interior minister who spearheaded the country's fierce crackdown on al-Qaida's after the 9/11 attacks in the United States.

Nayef rose to become next in line to the throne and his death unexpectedly reopens the question of succession in this oil powerhouse for the second time in less than a year.

The 88-year-old King Abdullah has now outlived two designated successors, despite ailments of his own.

Now a new crown prince must be chosen from among his brothers and half-brothers, all the sons of Saudi Arabia's founder, Abdul-Aziz.

The figure believed most likely to be tapped as the new heir is Prince Salman, the current defence minister who previously served for decades in the powerful post of governor of Riyadh, the capital.

The crown prince will be chosen by the Allegiance Council, an assembly of Abdul-Aziz's sons and some of his grandchildren.

Nayef had been out of the country since late May, when he went on a trip that was described as a "personal vacation" that would include medical tests. He travelled abroad frequently in recent years for tests but authorities never reported what ailments he may have been suffering from.

Nayef had a reputation for being a hard-liner and a conservative. He was believed to be closer than many of his brothers to the powerful Wahhabi religious establishment that gives legitimacy to the royal family, and he at times worked to give a freer hand to the religious police who enforce strict social rules.