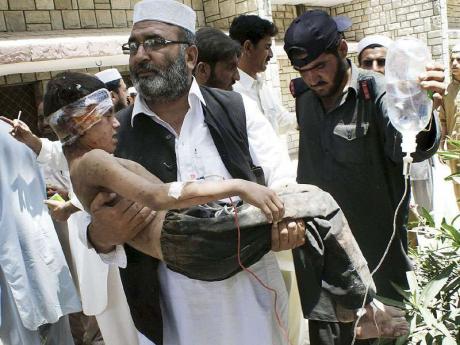 A car bomb exploded at a crowded bazaar in a north-western Pakistani tribal region near the border with Afghanistan yesterday killing at least 26 people and wounding more than 50 others.

Several shops and vehicles were also badly damaged in the attack in the town of Landi Kotal, a Pakistani government administrator reported.

He said hundreds of people were in the bazaar when someone parked the explosive-laden car and minutes later the bomb exploded.

TV footage showed the charred skeleton of the car used in the attack and local residents rushing to help take the victims to hospitals.

One of the wounded, 45-year-old Khan Mohammed, said he was sitting with a nephew in his shop when he saw a vehicle stopping in the street. Moments later he heard a massive blast.

"Something hit me in my shoulder and I fainted," he said, speaking from a hospital bed. He said two of his nephews who were outside the shop at the time of the explosion were killed and that he was worried for friends hurt in the attack.

No one immediately claimed responsibility for the morning blast, but the suspicion fell on Pakistani Taliban who often target security forces and public places with bombings and shooting attacks.