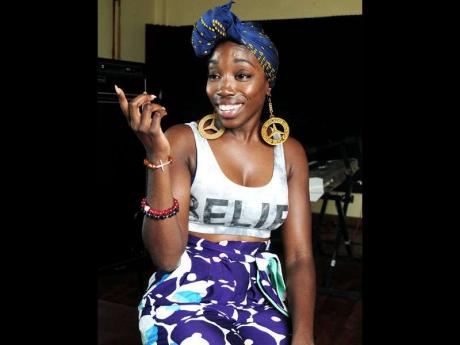 There's just something about Jamaica that enthrals international artistes, even those like Estelle who have travelled the globe and have seen and done it all.

The Grammy-award winning, Britain-born singer paused for a quick chat with Outlook at the Tuff Gong studies during rehearsals for her performance at Pulse's Caribbean Fashionweek last weekend.

A true lover of Jamaica, the 32-year-old gushed about her love for the island, trying hard to ditch her deep British accent for the light Jamaican Patois lilt. She loves the sun and it is one of the main things she looks forward to when visiting.

"We come to the island and one of the first things I always tell them is to roll down the window down so that I can feel the heat. I love the whole energy and vibe, especially since its beside the sea."

Although not a Jamaican by birth, Estelle is enamoured by the nightlife in Jamaica as she shared that one of her favourite spots in Jamaica was the Asylum nightclub.

"I've been to the Quad before and to Fiction recently. I go to clubs when I come here just to hang out because that's my whole thing. There is also the beach but I don't normally get to go there."

Strawberry Hill and Geejam are some of the other places that she has enjoyed and spoke highly of as she spoke admirably about the countryside and the beauty that is present here.

Her visit last week was her third to the island. She shared with Outlook her take on fashion.

"My fashion sense is comfortable. I'm not good at the super-dressy, hot-country moment. Fashion to me is the look and style. It is about being comfortable in your skin and how you feel every day," she stated.

Some favourite designers of hers are Hermes, Top Shop, DVF and Karl Lagerfeld, whom she describes as the king.

She knows Jamaica is famed for its food as well as for the Rastafarian culture with the "wraps and the dreads" and this subculture, she said, has influenced her music, which she revealed she can't live without.

Apart from music, she could never live if stranded on a island without her cellphones fully charged and a picture of her mom and herself as a baby.

Totally immersed in the Jamaica culture, Estelle said that Bob Marley is one of her biggest musical icons.

"I know this might seem false because we are in the studio, but Bob Marley is definitely one. We have the same perspective. When I write music, it has to come from somewhere, just like how Bob Marley said it when I watched his film and all my music comes from somewhere," she shared.

She also loves Mary J. Blige, who she describes as her big sister, as well as Ella Fitzgerald.

All Of Me just dropped a couple of months ago, but the singer said it feels good to be back after a four-year break.

Right now, she is out touring and promoting All Of Me. "People are really loving and appreciating my music."

She told Outlook that he transition from Britain to US has been fun.

"I've been travelling a lot, so I have been back and forth. I don't think I'm missing anything. The great thing about travelling is that I get to see where I want to be physically, and right now, I want to be on the west coast. Things can sometimes get hectic in my schedule and so on the west coast, I get to sleep, which is important," she said. "I'm in my bed before 12 and that's just amazing."