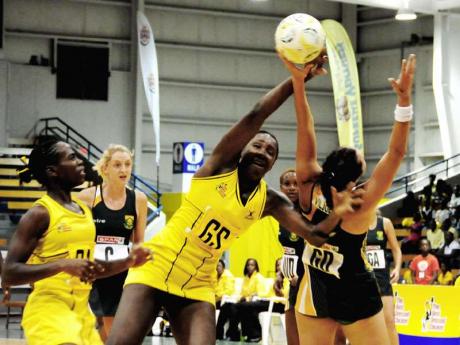 The match, which will be played at the National Indoor Sports Centre, is scheduled to start at 5 p.m. with the Sunshine Girls, who are ranked fourth in the world, leading the series 1-0 after their resounding 63-48 first-game victory over the Proteas.

Jamaica's attack will once again be led by goal shooter Jhaniele Fowler, who netted 49 goals from 54 attempts, goal attacks Ann-Kay Griffiths, who sunk 10 goals from 13 tries and Vanessa Walker, who shot four goals from six attempts.

These players are expected to receive valuable support from captain Nadine Bryan, along with the experienced pair of Malysha Kelly and Kimone Tulloch.

Jamaica's head coach, Oberon Pitterson-Nattie, is expecting a much tougher game from the South Africans and therefore is urging her players to limit their mistakes.

"We really need to eliminate a lot of our turnovers because I think this was a major problem for us (in game one)," said Pitterson-Nattie.

"We certainly will be looking to put the ball more into the circle because we didn't do that a lot, even though it was available for us to do it," she observed.

Pitterson-Nattie added: "We are also going to be looking to slow down their attacks and their circle shooters."

South Africa's coach, Elize Kotze, said that they will have to stick to the basics, even when the pressure is on, if they are to even the series today.

"Our problems were getting the ball into our goal circle and so we must ensure that we get the ball into that circle for the shooters to shoot it," said Kotze, whose team is ranked number six in the world.

"The Jamaicans are all wonderful athletes, but Fowler at the moment is the key player in their side and so we have to make sure that we keep the ball away from her," she said.

Kotze added: "I would have liked to see more goals in that basket and once we are able to do this in game two then we might win the game," Kotze said.

Chrisna Bootha, who netted 37 goals from 52 attempts and Maryka Holtzhauzen, 11 goals from 13, in the opening game, will once again lead the South Africans' charge for victory.