Ramdin should answer for his behaviour 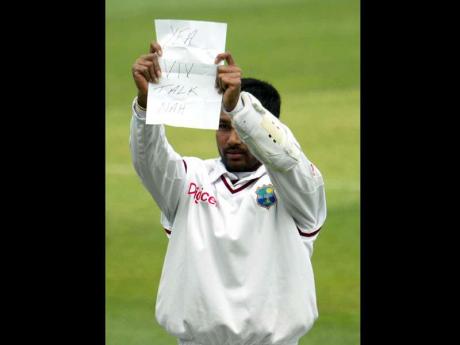 West Indies' Denesh Ramdin holds up a note directed at Sir Viv Richards after reaching his 100 during the fourth day of the third Test match against England at Edgbaston cricket ground. - AP

The third and final Test of the West Indies tour of England ended in the rain of Birmingham with three days rained out and leaving England comfortably winners of the series after the home team had won the first two Test matches by five and 10 wickets, respectively.

In the series, the West Indies fielded well, Marlon Samuels and Shivnarine Chanderpaul batted well and they had one good innings each from Daren Sammy, Denesh Ramdin and Tino Best.

With their fielding being good and sometimes brilliant, however, it was their bowling, almost like their top four batsmen in the order, which let down the West Indies.

Of the fast bowlers originally selected, Ravi Rampaul did not start the series due to injury and Fidel Edwards, Shannon Gabriel and Kemar Roach did not finish it, also due to injury.

Overall, however, the West Indies did well, reasonably well, especially while displaying a wonderful fighting spirit, courtesy of the efforts of the captain and the coach.

The West Indies just did not do well long enough.

When all is said and done, however, the batting of Samuels and Chanderpaul, Sammy, Ramdin and Best; and the bowling of Roach in one Test, were overshadowed by the disrespectful, embarrassing, unnecessary and childish behaviour of Ramdin during the rain-ruined match at Edgbaston.

After scoring a century, Ramdin put his bat on the ground, took off his helmet and his gloves, went into his pocket, took out a piece of paper, opened it up, turned it towards the commentary box, pointed to it and angrily waved the paper towards the press box.

On the paper was written: "Yeh Viv talk nah". And it was aimed at Viv Richards.

In the second Test match, Richards had criticised Ramdin for his underperformance with the bat.

On top of it, what makes Ramdin's behaviour so distasteful and embarrassing is that he should have known better.

Ramdin was a West Indies Youth captain, he is the captain of Trinidad and Tobago, he has been vice-captain of the West Indies and he is being looked at as the next West Indies captain.

What is also embarrassing is that apart from the International Cricket Council (ICC), which has fined Ramdin, and apart from a captain's feeble "excuse" by Daren Sammy, neither the management of the team nor the West Indies Cricket Board (WICB) has said one solitary word about the incident.

At least I have heard nothing.

Ramdin's behaviour was not what is expected in cricket, and to say, according to Sammy, that his emotions got the better of him, is no excuse.

Was Richards right in saying that Ramdin's performance had deteriorated?

Yes, no doubt about it.

If after 45 Test matches, if after 1,635 runs with two centuries and an average of 23.84 and with his last 50 coming almost three years ago, Ramdin thought he was doing well, then maybe, just maybe, he should never have been selected in the first place.

On top of that, Ramdin should remember that Best, the number 11 batsmen, scored a record 95 runs for a number 11 in that innings also, and that his century came, not in an important Test match, not against a full England team, and not in full Test match, but after England had won the series, against a team without its best bowlers, and in a Test match which had lost the first two days and was heading for a draw.

The WICB has a duty to do something about Ramdin's action and in future to groom players while preparing them to represent the West Indies, especially those who it considers as possible captains.

The captain of a West Indies team is different from all other teams, if only because of the different countries involved and the tightrope that one has to walk.

The one-day action began yesterday and whether they won or lost the first match, the West Indies boast a strong side and should start as the favourites.

A squad of players that includes batsmen the quality of Christopher Gayle, Darren Bravo and Marlon Samuels, exciting all-rounders like Daren Sammy, Kieron Pollard, Dwayne Bravo, Andre Russell and Dwayne Smith, an interesting spin bowler like Sunil Narine and fast bowlers such as Ravi Rampaul and Fidel Edwards should be good enough to beat England, and probably, if they are on top of their form, if they play true to form, also the rest of the world.

Correction: In last week's column Zeniffe Fowler was mistakenly and regrettably, called Andre Creary in the article headlined 'A lovely day at Melbourne Oval'. Fowler was the batsman who scored an impressive 55 not out with seven sixes and one four in the Cricket Clubs Activities Committee's fund-raising cricket match at Melbourne Oval on Saturday, June 2.