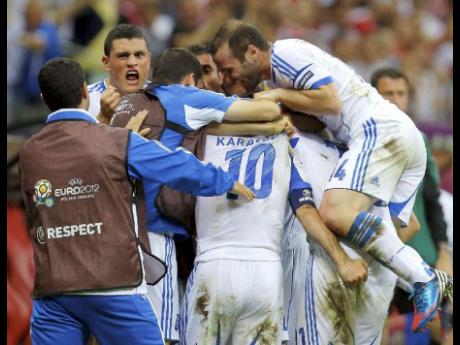 Greece surged into the European Championship quarter-finals, defeating Russia 1-0 yesterday on a goal by Giorgos Karagounis just before half-time.

Karagounis, making his team's record-tying 120th international appearance, sent a low shot under goalkeeper Vyacheslav Malafeev with the final touch of the first half.

The Greeks, the 2004 European champions, then did what they do best: defend.

Even as the Greeks closed down in front of their net, Karagounis looked to have won a penalty kick when Sergei Ignashevich appeared to bring him down in the area. But Swedish referee Jonas Eriksson instead booked the Greece captain for a dive, meaning he will miss the quarter-finals.

Russia, semi-finalists four years ago, were the overwhelming choice going into the match at the National Stadium, but they were again guilty of squandering chances.

The Russians became one of the tournament favourites with their 4-1 win over the Czech Republic in their opening match, then drew with Poland and finally lost to Greece, snapping a 16-match unbeaten run.

Russian players dejectedly tramped off the field immediately after the final whistle, while Greece's euphoric players hugged one another and then celebrated with their fans.

Giorgos Tzavelas nearly gave Greece a two-goal cushion when he curled a free kick over the Russian wall in the 70th minute, but saw the ball slam against the top of the goalpost.

Michalis Sifakis then ensured his team would advance when he saved a close-range shot by substitute Pavel Pogrebnyak in second-half injury time.

Russia came close several times in the first half. But even as the team laid siege to the Greek goal they were largely restricted to long-range efforts after the break as they went after the equaliser.

Russia forward Alan Dzagoyev came close in the 84th minute with a glancing header off a cross from Andrei Arshavin, but the ball drifted just wide.