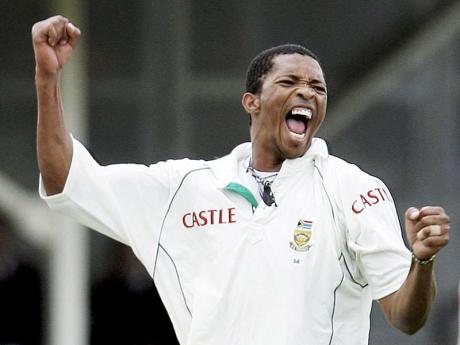 South African fast bowler, Mahkaya Ntini, has been confirmed for the T20 Jamaica 50 Classic set for this August 18 and 19 at Sabina Park.

Organised by the Sports Innovators Group (SIG), a company created to fill the gaping void between Jamaica's immense sporting potential and its ability to benefit from it, the cricket classic is set to coincide with Jamaica's celebrations of its 50th year of Independence.

"We are very pleased to announce that Mahkaya Ntini has confirmed his participation in the T20 Jamaica 50 Classic," said Paul Campbell, who along with Walter Scott, Alva Anderson, Eugene Stanley and Howard Hamilton make up SIG.

"We promised that fans would get to see some of the icons who have played over the last decade and Ntini's confirmation is evidence that we intend to deliver on our promises to make this event the best of its kind this summer."

During his 101 Tests, Ntini, who was a key bowler in South Africa's bowling attack between 1998 and 2009, snared 390 Test wickets, including 18 five-wicket hauls. In T20 competition he has taken 63 wickets with best figures of four for 21.

According to Campbell, negotiations are going well with other international and local players as well.

"Negotiations have been going on very well. We are constantly in touch with the overseas players, the local players, the Caribbean players and we are pleased. Almost on a daily basis we get responses which are favourable so we are quite happy with that so far," said Campbell.

The Jamaica 50 T20, however, is not just about playing cricket. It will be about having a celebration that all Jamaicans will want to be a part of, something that will have a strong focus on fun and family; elements that will make for a very memorable occasion.

The organisers were quick to point out that the Jamaica 50 T20 is an entertainment event, so in addition to the entertainment that the cricket will provide, it will be about recapturing the passion surrounding the sport.

"It's about remembering the days when cricket used to be a family affair, when we used to cook food and carry your whistle and horn and celebrate with those who are winning, and then fused with that is the music and entertainment and when we speak of entertainment, we speak of quality entertainment in the sense of current talent that will certainly attract the next generation, which is an important target market. We will also have artistes from the past also," Campbell said.

These elements, he said, are important for their television partners with whom negotiations are also gelling nicely.

"We're looking forward to executing well and delivering a stellar event," he said.