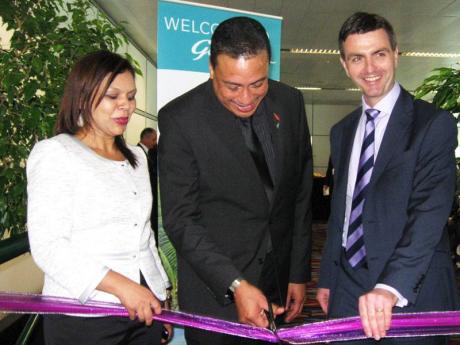 Arriving on the incoming flight from Piarco International Airport, Port-of-Spain, Trinidad, was the airline's Acting Chief Executive Officer Robert Corbie who said it was the culmination of six months of hard work to reach the goal of opening up the London gateway.

"We are in a comfortable position to fit this route into the network and we are now getting ready to pick up the expected traffic from the UK Diaspora community between now until Christmas, and then onto the Carnival month of February next year. We will also be working closely with the Tourism Development Company as we will be creating more opportunities for tourism traffic into the region," Corbie said.

Also arriving on the flight were CA executives Alicia Cabrera, senior marketing manager and Nirmala Ramai, executive manager. Ms Cabrera, said: "We are happy to finally land at Gatwick, and this is really a historic milestone for a six-year-old regional carrier to expand into London. The team really worked hard to make it happen."

After a quick tour of the check-in facilities in the North Terminal, the CA executives, who were also accompanied by UK-based operations manager Juanita Collins, met with departing passengers who were booked on the inaugural outgoing flight, while a steel pan orchestra and costume girls gave the check-in-experience a really carnival flavour.

Later in the departure lounge for the first non-stop flight to Piarco International Airport, Port-of-Spain, Mr Cobie was joined by Guy Stephenson, Gatwick Airport's chief commercial officer, in cutting the Caribbean Airlines' commemorative cake and the ribbon at the gate to signal the start of the service.