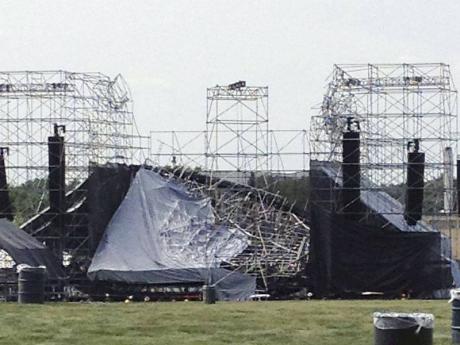 This photo provided by Alexandra Mihan shows a collapsed stage at the site for a Radiohead concert at Downsview Park in Toronto on Saturday. - AP Photos 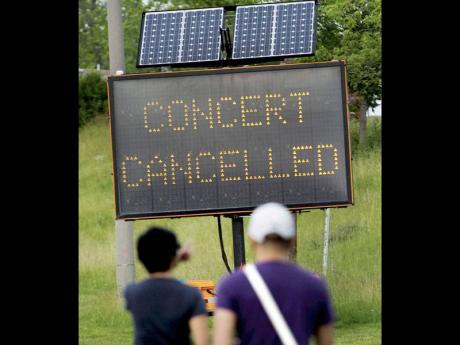 People read a sign informing of the cancellation of a Radiohead concert after a stage collapsed at Downsview Park in Toronto on Saturday.
1
2

A massive stage collapse hours before a Radiohead concert was to begin left a British man dead and three others injured, officials said.

Emergency Medical Services deputy commander David Viljakainen said the Brit who was trapped under the rubble Saturday was pronounced dead at the scene. Officials said he was in his mid-30s.

A 45-year-old man was hospitalised with a head injury and two others were treated at the scene for minor injuries at the Downsview Park venue, said Viljakainen.

The venue said on its website that the sold-out concert was cancelled.

Fire Services Platoon Chief Tony Bellavance said officials were alerted to a person trapped under the rubble and crews assisted in extracting the victim. "It was a crushing injury that killed the man," he said.

Police spokesman Tony Vella said the crew was setting up the stage when it collapsed.

"They were setting up when the top portion collapsed on top of them. Unfortunately, four people were hurt. The remainder of the people, when they heard the stage coming down, ran from the area," Vella said.

Dusty Lalas, an employee with Toronto radio station The Edge, which was sponsoring the concert, said the structure suddenly caved in.

"There was a loud crash and it sounded like sheet metal and lightning and we just saw the stage collapse," Lalas said.

Radiohead tweeted that "due to unforeseen circumstances tonight's concert at Downsview Park has been cancelled. Fans are advised not to make their way to the venue."

Radiohead's website had listed the concert as being sold out, with 40,000 tickets sold.

Jaime Rivest, 33, said around 4 p.m. the stage suddenly came down, crumpling and falling onto itself.

"It was like a tornado hit the stage and in just moments the stage came down with metal everywhere," she said.

Rivest said security officials rushed to evacuate the area. She said there were possibly about 1,000 people there hours before Radiohead was to take the stage at 9:30 p.m. The doors for the show opened at 5 p.m. and other acts were scheduled to perform.

Police said the park wasn't full, but there was a considerable crowd of people already waiting for the show amid sunny and clear conditions.

Investigation to be done

Viljakainen said the Ministry of Labour would investigate to determine the cause of the collapse.

There have been a number of concert stage collapses in recent years.

Six people died last August when the stage collapsed at a Sugarland concert in Indianapolis; five died in Belgium when a storm swept in and toppled the stage at the Pukkelpop Festival.