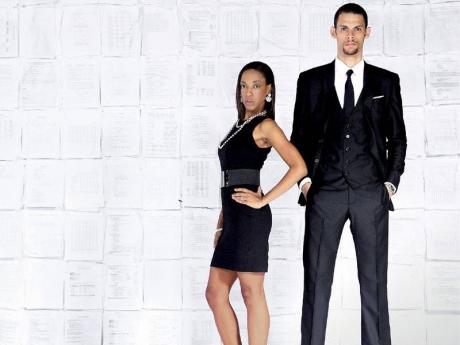 Keisha Patterson (left) and Keiran King, the stars of 'Mr and Mrs Blacke'.

Broadway or Broadway theatre, is known for theatrical performances presented in style and finesse, and is considered the highest level of commercial theatre in English-speaking countries. Shows are performed by outstanding actors, backed by impeccable crews that assist in pulling off amazing experiences for their audiences.

Eight Seven Six has taken the initiative to bring the Broadway standard to Jamaican audiences.

Its first attempt, Last Call, proved successful with packed shows over four weeks of performances along with industry and audience recognition, especially for its production value. Last Call won the industry's award for Best Production, Best Lighting Design and Best Set Design and scored in the top five in 11 categories at the last Actor Boy Awards.

Mr & Mrs Blacke will bring an even better Broadway experience to audiences this year.

Multi-talented Keiran King, owner of Eight Seven Six, and playwright for Last Call and Mr & Mrs Blacke, will be on stage this year as lead actor alongside Keisha Patterson as Mrs Samantha Blacke.

"I am very proud to be associated with this 100 per cent Jamaican production. From the high quality of the writing of the play, to the professionalism of the production team, to the exceptional talent and hard work of the actors, it has been an enriching experience for me to be part of Mr & Mrs Blacke. I'm confident that audiences are going to experience a powerful and entertaining evening of theatre," said Paul Issa, director of Mr & Mrs Blacke.

Paul Issa studied drama at Tulane University in New Orleans and at the Neighborhood Playhouse School of the Theatre in New York. As a young man, he taught drama and speech, worked in radio broadcasting, journalism and publishing, as well as reviewed, directed and acted in theatrical productions.

Tickets can be reserved online at mrandmrsblacke.com and everyone can share in the production stages via the show's updated blog.