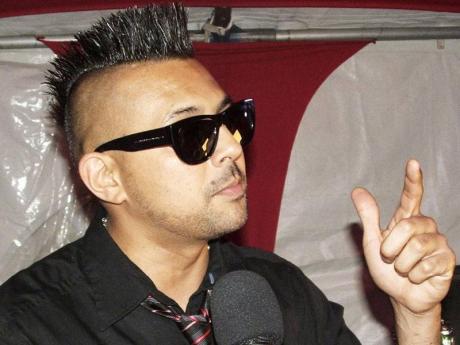 "Tomahawk is appropriate because it's a rare specimen and so is Sean."

These were the sentiments of Irvin 'Carrot' Jarrett, the first producer who produced a Sean Paul recording.

It was minutes after 8 p.m. when the man of the moment, Sean Paul Henriques arrived at the Fiction nightclub for the Caribbean launch of his fifth studio album Tomahawk Technique.

The 12-track album has added a new dynamic to Sean Paul's music by merging his signature sounds with techno and pop rhythms.

Sean Paul, who has won countless awards, including Soul Train, MOBO American Music Awards, and, of course, a Grammy in 2004, told The Gleaner he chose the title Tomahawk Technique because of the cutting-edge music on the album.

"My music has always been the cutting edge; I've been taking real authentic dancehall music international. I think that I've been chopping and going through. A tomahawk is an axe and the technique is to chop and go through, so I think that I am the cutting axe of the music right now and that's what I'm saying with this name," Sean Paul said.

According to Jarrett, Sean Paul has remained humble throughout his musical journey. He describes Sean Paul as unique in both character and performance. He noted that even though Sean Paul changed his sound, he has not changed his roots which are deeply embedded in loyalty to dancehall.

In his address, CEO of Big Yard, Robert Livingston, said the job Sean Paul was doing of maintaining dancehall on an international level was not easy.

"Most artistes are trying to get to Sean Paul's status on the international market. Every artiste wants to be where Sean Paul is. He gets my blessing and my respects," Livingston said.

The album, which was released on January 30 by Atlantic Records in parts of Asia and Europe, as well as South Africa and Mexico, has been doing well.

"Sales with music in general is not very good. I've sold more than 200,000 of the albums worldwide, a couple million singles on She Doesn't Mind and Got To Love You, but in terms of overall sales of albums its not good, not just for me, but for the rest of the world. You have 15,000 bands on MySpace giving away free music, you also have YouTube and Twitter, which weren't around when I first started the game. I still feel that I can sell a good album and that's why I like to put them together," he said.

"Companies have been telling me to just do singles, and I keep expressing to them that I'm a person that does singles every day in Jamaica, but to make a difference in our world and to have an impact we need to have albums. If we just kept doing singles, we'd be doing nothing different. I want to present albums and encourage other artistes to do the same," Sean Paul said.

The night's proceedings included a question-and-answer segment by co-host Pepita. Videos of some of Sean Paul's most popular songs were also shown throughout the night.

Singles from the album, including Got 2 Luv U, with Alexis Jordan, and She Doesn't Mind have shared the number-one spot in Switzerland and Austria and are among the top-10 singles in other countries.

Hold On is number one in Belgium and number 35 in France.