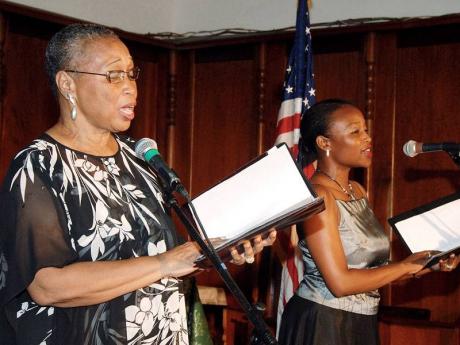 Many months ago, mezzo-soprano Christine MacDonald Nevers set herself a daunting task - to give a concert comprising nearly 30 songs in four languages, French, German, Italian and English.

It took place at the University Chapel recently and among those present were two of her former tutors.

If their assessment of the quality of the presentation was in line with that of the general audience, the tutors, June Thompson Lawson and Winston Ewart, would have given Nevers at least an 'A', maybe even an 'A+'.

The audience responded as enthusiastically as it could, with a standing ovation at the end of the concert.

It would have been difficult to fault Nevers with most of the items. She is not only a superb singer, with an excellent tone, impeccable diction and great breath control and projection; but, as a part-time actress, she also has very good timing and expressiveness. Add to that the sweetest of personalities and you have your complete performer.

What Nevers showed she does not have is a perfect memory. Towards the end of the concert, after nearly two hours of singing, she fluffed the lines of one of the more complicated songs, the Hart/Rodgers novelty ballad, To Keep My Love Alive. It tells the story of a woman who murders about a dozen of her husbands and Nevers forgot the order in which they were killed. Good naturedly, she acknowledged the memory lapse, asked Ewart, her pianist, for the line, and continued singing.

No other presentation problem marred the concert, which was divided into 10 segments: Opera, Lieder, Duets, Creole Songs, Negro Spirituals, Art Songs, Folk Mix, Music - The Food of Love, On a Lighter Note and Thank You. An 11th subheading could have been added, Encore, since, at the insistence of the audience and the informative emcee, Gervais McLeod, Nevers did give one.

The concert's many segments and the several composers chosen indicate that Nevers and those who helped her with the programming recognised that variety is important in a show. They might have gone one step further and expanded the duets section.

In it, Nevers sang with her mother, Marilyn Brice MacDonald, also a professional mezzo-soprano, the well-received Evening Prayer (Humperdinck) and Barcarolle (Offenbach). She then sang Ave Maria (Mascagni) with accompaniment by both Ewart on piano and flautist Albert Shaun Hird.

Brice MacDonald returned later to sing, by herself, the haunting folk song Eva, to an arrangement by Jamaica Folk Singers founder Olive Lewin, a special guest at the concert. It was followed by an interesting entwining of I'm Getting Married in the Morning from the American musical My Fair Lady and the Jamaican folk song Lizzie Jane, with Nevers singing the former and Brice MacDonald singing the latter. There was both humour and pathos in the Brice MacDonald/Ewart arrangement.

Even though few in the audience would have understood the foreign languages used, the response showed that the delivery gave pleasure.

Still, it was with the lighter songs, when she was able to escape from the confines of the lectern and score, that Nevers was able to most joyfully communicate with the audience. Eye contact, not easy when you're reading a score, is so important.

The final item on the printed programme was the hilarious Flanders/Swann composition, A Word on My Ear, in which the singer confesses that, though a singer, she is tone deaf. It turned out, however, that Nevers' last song for the evening was an impromptu Happy Birthday sing-along with the audience for Nevers' niece and Ewart.