A moment with 'Red' 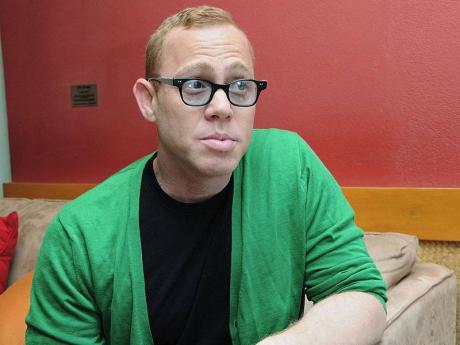 Known for sophisticated swimwear with a sense of whimsical flair, renowned fashion designer and self-professed New Yorker, Red Carter jetted into the island for 'The Collections' at The Wyndham hotel on Thursday.

Born Daniel William Carter, he casually shared with Flair that he got his nickname from his father as a child growing up because his hair was red.

"I was teased all my life about my red hair, so I decided to adopt the name in design school because I needed a design name," he said. He admits that he has been to Jamaica a few times, albeit on cruise ships. He is, however, more excited about the trip this time around because he gets to enjoy Kingston more. He will also be working with Kerry-Ann Clarke, managing director of Kerry manwomanhome.

"I'm here to help Kerry in the growth of her brand, as well as the growth of my own brand, and to just represent fashion in Jamaica." He continued, "After the show, we will be sitting on the beach in Ocho Rios for two days pretending that there is no stress," he laughs.

Building upon his experience in the sportswear category almost 10 years ago, Red launched his swimwear brand in 2004. The Red Carter collection incorporates fit, form and function, combining subtle details, bold prints, and advanced technical constructions often neglected by other swimwear designers. The clientele for his suits, Red admits, are usually upper end. "My suits retail for about US$180 and up and we sell them in department stores in the US (United States) and Jamaica." Department stores such as Barneys New York, Bloomingdales, Intermix, Nordstrom and Saks Fifth Avenue and specialty boutiques across the US and Kerry manwomanhome in Jamaica.

The casually dressed designer shared a tidbit about the ideal woman that he caters to. She is one who is sophisticated, understands fashion trends, mixing contemporary with other brands. He also stated that he finds it interesting to work with females with figure 'flaws' to try his best to disguise them. He has worked with some of Hollywood's hottest female celebs, including Kim Kardashian, Rihanna, Elle McPherson, Heidi Klum, Katy Perry, and the list goes on.

He is currently working on a new collection to be shown at Miami Swim Week in July. That collection has two themes, he revealed. "There is one that's dark and sexy with a photographic element with feather patterns, animal prints etc, and there is another with embellishment treatments," he said.

This talented designer is also a ghost designer for Jessica Simpson's swimwear collection and states that he likes designing for a non-zero woman because he likes the versatility and thinks it's interesting to work with different body types. A one-time designer of menswear, Red confessed that he no longer caries a men's line because the women's collection got too huge, so the men got left behind.