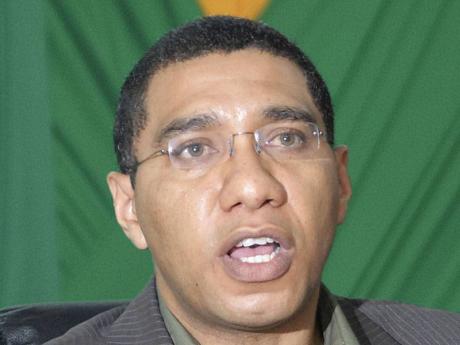 
OPPOSITION LEADER Andrew Holness said there is an urgent need for the implementation of the National Parenting Policy (NPP), which is geared towards ensuring fathers face up to their parental responsibilities.

"Fathers should not be able to, at their whims and fancy, neglect their children or decide that they will not accept responsibility for their children ... . This is what the policy is all about - developing a system of accountability," Holness told The Gleaner yesterday.

His comments were made on a day that the world honoured fathers and celebrated the influence of fathers in society.

"In as much as we praise true fathers today, the society must, however, acknowledge that there are too many fathers who are absent from the lives of their children," Holness said.

But the Reverend Karl Johnson, general secretary of the Jamaica Baptist Union, said it cannot be left up to the Government alone to ensure men play their role as fathers.

"I believe women have to band together to use their various resources to make us men stop. Women have to realise that they are not just property, but partners and shapers," Johnson said.

Johnson said the attitude of men to fatherhood would change "if women decide to teach us a lesson, using all sort of strategies such as a sex strike, as was the case in Liberia".

In 2003, Leymah Gbowee, a Liberian peace activist, organised a sex strike where Liberian women refused to have relations with men during the country's civil war.

In the meantime, Holness is of the view that the proposed parenting policy represents the best attempt at ensuring fathers face up to their responsibilities. He argued that it is critical that the parenting policy be implemented as it is a critical pillar in ensuring the education of the nation's children.

"We took the view that education really starts at the home and parents are the first teachers. Therefore, it was important that we educate parents about their role and importance in the education life cycle of their children, which is why we developed a policy which spoke to, first of all, defining parents within the context of Jamaica, establishing standards for parenting, developing systems for information dissemination, and training and support to assist parents who are in crisis to cope," Holness said.

"I haven't seen anything to say that the policy is being fast-tracked ... . The policy should now be at the implementation stage and the formation of the parenting commission is something that is critical to have the policy implemented," the opposition leader lamented.

Yesterday, Education Minister Ronald Thwaites was unable to give a exact time frame as to when the policy is expected to be made into law, but acknowledged the urgent need.

"I expect it to come to Parliament soon. There has been some minor changes."

He also believes there is an urgent need for a culture change in relation parents accepting responsibility for their children.

"There are limitations to what law can do in respect of what is needed, which is a profound culture change in favour of acknowledgement and support of all children by both parents."

However, the minister added that, contrary to popular belief, he believes that more fathers are playing their role.

"I am noticing that many more fathers are taking a close interest in their children's welfare and the policy of bedside registration at birth has significantly increase the acknowledgement by fathers in comparison to previous time," he said.