Powell's 139 puts Windies A on top 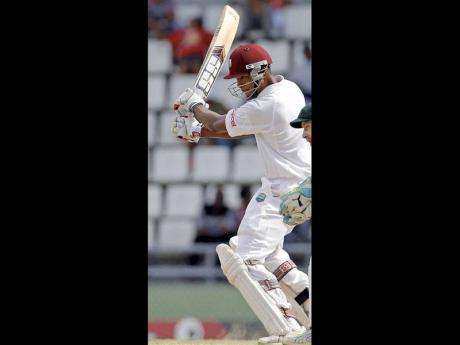 Opener Kieran Powell kept himself in the Test selection frame when he stroked his third first-class hundred and his second in as many months, to lead an impressive West Indies A effort on the second day of the decisive third and final Test against India A yesterday.

Drafted into the squad after returning to the Caribbean from a disappointing Test tour of England, the attractive left-hander unfurled a superb 139 as West Indies A finished the day on 320 for eight, a lead of 90 on first innings.

Resuming the day unbeaten on 16, Powell played with fluency and his typically boldness to raise three figures just before tea at the Beausejour Cricket Stadium.

The knock was his highest first-class score and it came on the heels of his 108 for senior West Indies against England Lions at Northampton last month.

Despite the century, the 22-year-old managed just 71 runs in five innings as West Indies lost the three-Test series 2-0.

Yesterday, he took centre stage, stroking 12 fours and three sixes in an innings that required 255 balls and lasted six hours and 46 minutes.

He reached his half-century just before lunch off 101 balls with four fours and a six - a straight hit off left-arm spinner Akshay Darekar - and brought up his century with a beautiful straight drive off off-spinner Rohit Sharma.

Powell's landmark came off 172 balls in a shade over four-and-a-half hours, with nine fours and three sixes.

Along the way, he anchored several crucial partnerships to keep Windies A on top.

He shared 54 for the second wicket with Kyle Corbin (26), 51 for the third wicket with Nkrumah Bonner (26) and another 67 for the fifth wicket with Donovan Pagon who scored 30 from 56 balls with five fours.

However, Powell's best partnership was a positive 78-run effort with wicketkeeper Devon Thomas whose even 50 required 79 balls in an hour-and-a-half at the crease, and included two fours and two sixes.