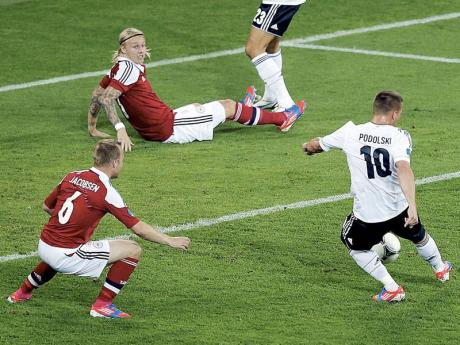 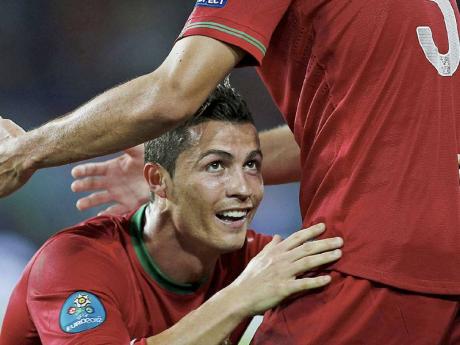 Portugal's Cristiano Ronaldo celebrates his second goal during the Euro 2012 football championship Group B match between Portugal and the Netherlands in Kharkiv, Ukraine, yesterday. - AP
1
2

Germany advanced to a quarter-final against Greece after beating Denmark 2-1 yesterday in their last Group B match at the European Championship.

The Danes were eliminated.

Portugal also advanced to the last eight. Star player Cristiano Ronaldo finally found the form he was lacking at the championship, scoring twice yesterday to give Portugal a 2-1 win over the Netherlands.

Lukas Podolski opened the scoring for Germany in the 19th minute and Lars Bender slotted home the winner in the 80th, after Michael Krohn-Dehli had equalised for Denmark in the first half.

Germany controlled possession, had the best chances and were never really challenged by the Danes, who go home after stunning the Netherlands in the first match but losing to Portugal in the second.

Germany seized the initiative from the kick-off and came close twice before Podolski, playing his 100th international match, scored his first goal of the tournament.

Mario Gomez set him up with a deft backheel touch following Thomas Mueller's low cross from the right flank.

Denmark replied just five minutes later with Krohn-Dehli heading in the equaliser from a set piece that stunned the German defence. A corner found Nicklas Bendtner, who headed the ball into the area where Krohn-Dehli nodded home his second goal at Euro 2012.

Jakob Poulsen missed a chance to put Denmark in the driver's seat at the start of the second half when his shot grazed the outside of German goalkeeper Manuel Neuer's right post.

After that scare, the Germans were firmly in charge and denied Denmark any real chance of getting back into the game.

Coach Morten Olsen's men were already looking tired when Bender, replacing suspended right back Jerome Boateng, picked up a pass from Mesut Oezil and made it 2-1.

Germany finished on top of the group with a perfect record of three wins and will face Euro 2004 champions Greece on Friday in Gdansk.

In the Portugal-Netherlands clash, Ronaldo, who had failed to sparkle in his team's two previous matches, produced an equaliser with his first goal of the tournament in the 28th minute and scored the winner in the 74th.

"Once again, we showed how united we are as a team,'' Portugal midfielder Miguel Veloso said. "It wasn't easy to start with a defeat. The secret was our defending, our humility.''

Needing a win to have a chance at staying in the tournament, the disappointing Dutch fielded an impressive attacking line-up featuring Klaas-Jan Huntelaar and Robin van Persie up front, but it wasn't enough to keep them at Euro 2012.

The Dutch lost in the World Cup final to Spain two years ago and, with stars like Van Persie, Arjen Robben and Wesley Sneijder, had anticipated a strong run at Euro 2012.

Instead, it will be Portugal in the quarter-finals facing the Czech Republic on Thursday in Warsaw.

Rafael van der Vaart had given the Netherlands the lead in the 11th minute at the Metalist Stadium, but Portugal then took control of the match.

And it was Ronaldo that stole the show.

Portugal cranked up the pressure after falling behind, with Ronaldo probing the Dutch back line and equalising after Joao Pereira's pass. It was the kind of chance he took so often at Real Madrid last season, when he scored 60 goals for his club. In Portugal's first two matches, he wasted those.

Portugal opened Euro 2012 with a 1-0 loss to Germany but rebounded to beat Denmark 3-2. The Portuguese went into the match against the Netherlands with an unchanged team from those encounters.