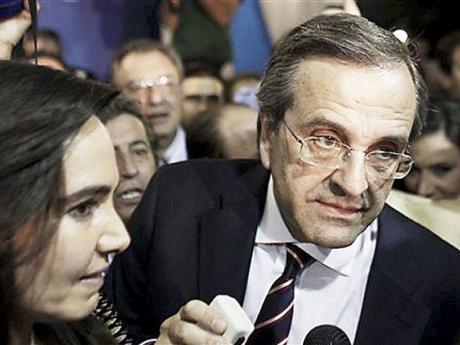 Greece's election result has eased fears of imminent financial disaster for Europe, but the continent's leaders are still searching for a way to contain a debt crisis that threatens the global economy.

A narrow victory for the New Democracy party in Greece means that the country is more likely to stick to the harsh austerity terms of its €240 billion ($300 billion) bailout and not face a chaotic exit from the euro in the very near future - an event many fear would destabilise Europe and send shockwaves through the world.

The country's economy is still in a very vulnerable state, however - it is in a fifth straight year of recession and could easily deteriorate to the point where a default and euro exit is inevitable.

Europe is struggling to put out several fires, not just the one in Greece. Heavily indebted Spain and Italy saw their borrowing costs rise Monday, increasing pressure on their government finances and keeping alive fears that another big bailout might be needed. That would considerably strain the Eurozone's ability to protect its members and keep the currency union together.

"The crisis is far from over," Commerzbank analyst Christoph Weil said in a note to investors. "A sovereign default by Greece and the country's exit from the monetary union has probably been avoided for the time being."

The Eurozone's challenges run deep. The economy is expected to shrink this year, with the so-called peripheral countries like Greece and Spain in painful recession. Many of its banks remain on life support, propped up by emergency credit from the European Central Bank.

Europe is a substantial trading partner with the rest of the world. If it falls into a deep recession sparked by a default in Greece or a massive bailout for Spain, orders for goods made in the United States (US) and China are going to start falling off.

No clear route out of the crisis has been laid out, and expectations are uncertain whether a June 28-29 summit of European leaders in Brussels will prove any more convincing than previous ones that failed to restore confidence.

"The crisis in Greece and the Eurozone remains intense," Fitch Ratings said. "While the risks from Greece have fallen for now, the severity of the systemic crisis engulfing the Eurozone is unlikely to diminish until European leaders articulate a credible road map that would complete monetary union with much greater fiscal and financial integration."

One beneficiary of Sunday's result in Greece may be US President Barack Obama, who has urged European leaders to take more vigorous action to avoid a threat to the US and global economies. The election win for New Democracy increases the likelihood that any disruptive Greek exit from the Eurozone would not happen until after Obama's contest with challenger Mitt Romney in the November US presidential election, rather than before.

New Democracy was starting talks to form a coalition government Monday morning after securing a narrow victory over left-wing Syriza, which advocated rejecting the deep spending cuts demanded in return for its bailout from other Eurozone governments and the International Monetary Fund. A coalition partner could include old socialist rival PASOK, which led the country until late last year.