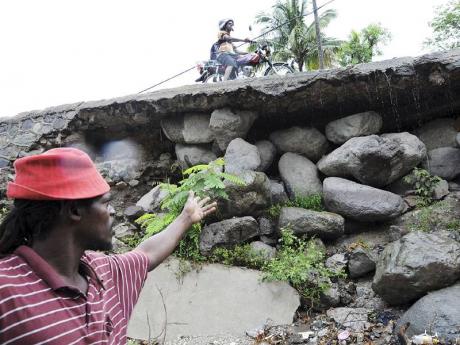 Oliver Jackson shows a section of the bridge in Kintyre, St Andrew, that is in need of repairs. - photos by Ricardo Makyn/Staff Photographer 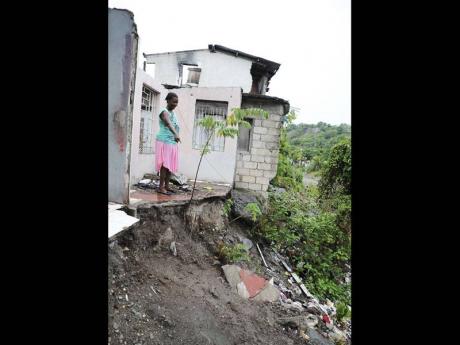 Joyce Wallace, a resident of Kintyre, points to a section of her home which has been destroyed by flood waters from the Hope River. She said she is desperate to leave.
1
2


While the recent rains have brought relief from the summer heat for some, for residents of Tavern and Kintyre in St Andrew, they spell trouble.

That's because these flood-prone areas are still at the mercy of mother nature. Tropical storms and hurricanes continually pound the area, taking inches from the riverbank each time.

"It nuh tek hurricane fi di river come down, enuh. Even two day of hard rain can cause that," said Oliver Jackson, a resident of Tavern. Jackson and other men from the community were taking shelter from the rain yesterday in a little shed, which provided a clear view of the boulders and mounds of sand in the - at present - dry riverbed. But they say it's just a matter of time before the 'real' rains come.

"You see even where we sit down yah so, when the river come dung, all yah so cover up. Nobody can pass," said Rohan Henry. Jackson pointed to the remains of a blue and yellow house in the river.

"That was my house, but it got swept away," he recalled. "Is a friend of mine have a house in the lane and tell me I can stay there. But if a man lend you something, him can always tek it back, you know."

He was fortunate, though. Another house close to the bridge was where a couple perished during Hurricane Gustav in 2008.

Jackson and some other men took The Gleaner down into the riverbed, even as the raindrops got heavier, eager to show what they say is a disaster waiting to happen. One section of the bridge appears to be only supported by boulders which, when the mighty waters sweep them away, will leave no foundation on which that section of the bridge can stand.

"We need them to clear out di stone and di sand. Di river want to mine out!" he declared. "All dem boulder deh shoulda move already. Is like dem a wait fi di heavy rain!" A lone tractor is parked in the riverbed, the men noting that it has done no clearing of sand since last Wednesday.

Alphanso Williams, who says he has lived in the community for more than 30 years, suggested that the culverts in the bridge need to be reconstructed as they are too small.

"When the river take up di stones, it cork up di holes, and di water nuh have nowhere to go," he said. He pointed to houses with backyards that have become non-existent due to the disappearing riverbank.

Some residents have been able to use boulders to bolster the foundation, but not everyone can afford that.

In Kintyre, a woeful Joyce Wallace still recalls how majestic her seven-bedroom house once was. It is now literally almost half what it used to be.

"Mi lose four bedrooms, mi balcony, mi washroom. If it (a hurricane) blow so, mi back inna di river," she said. Mama Joyce, as she is known, pointed to the remains of a building beside her home that she said belonged to her sister. The majority of that dwelling is gone. In order to show The Gleaner the damage, Mama Joyce had to go by the side of her house. If she went through the back, she would have fallen over the edge.

"I thought this was my dream house," she said, "but I didn't know it was a riverbed."

She said she was now trying to finish a home in St Thomas that was earmarked for relocation for residents from the area. She indicated that she was low on funds.