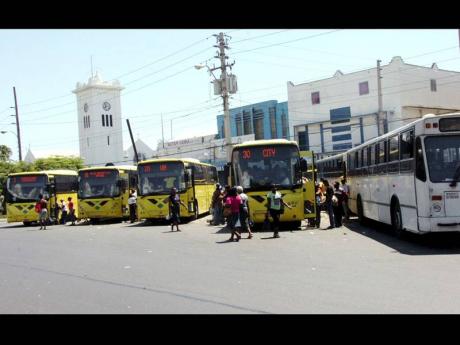 A section of South parade in downtown Kingston. 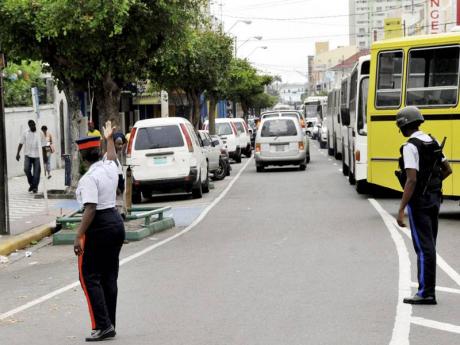 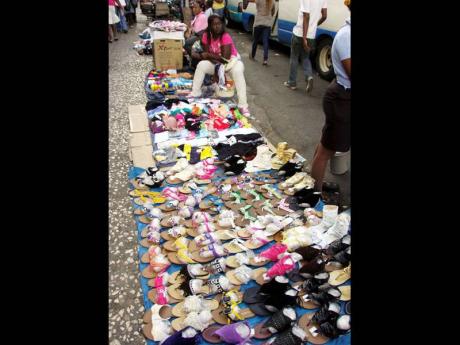 We were in the middle of what felt like a heatwave and people in the Parade area in downtown Kingston appeared agitated by the temperature. Everyone seemed on edge.

"Den ef yuh bunks inna mi, mi nuh must shoob yuh back?" yelled a woman who had just sent a short man sprawling. It appears he had bumped into her. The man seemed dazed as he sat on the ground rubbing his temple, and the people who saw what happened started laughing and pointing. Red in the face, the man got up and walked off as the laughter grew louder.

I had been standing outside the St William Grant Park when the incident occured. I had earlier seen the woman holding a bucket full of bottled water. She seemed pleasant, almost timid as she asked persons passing by if they wished to purchase any of the water. I surely would not have thought her capable of such a stunt. I was looking her over, silently contemplating the apparent power in her arms when she turned and looked at me. Our eyes met and I cracked a nervous smile. She frowned. Not wanting to anger her, I quietly made my way to the other side of the road, near some traffic lights.

Now Parade is not the kind of place to stop and have a chat. Everyone's moving far too quickly and, in any event, you'd be hard-pressed to find someone in the mood for pleasantries. It seems you can get almost anything to buy there, though. On that sidewalk alone I saw people selling women's underwear (plus sizes included), banana chips, furniture polish, bathroom scales and cotton socks. Buses and taxis were zigzagging all about and a few policemen and women were trying to keep order at the intersection. It seemed a Herculean task.

Amid all this fast-paced movement and the noise that complemented it all, I saw, in the distance, a slender woman sitting quietly behind a cardboard box. She was somewhat removed from the hustle and bustle and I wondered if she was selling the contents of the box. I walked over to her and offered a cheerful greeting. The woman, who I could now tell was about 50 years old, looked up at me quizzically. I asked her what she was selling.

"Selling?" she said, squinting. I pointed to the box. "Mi tell yuh mi selling nuttn?" she snapped. "Yuh hear mi ah seh sale out?" Embarrassed, I apologised for the misunderstanding.

"Bright!" the woman exclaimed before shifting her weight and turning away from me.

I walked away, hoping nobody saw what just happened.

A bus sped by giving rise to a cloud of dust. The exhaust fumes filled my lungs.

"Cover yuh nose, young bwoy," said an elderly man standing near to me.

Some distance away the driver of a taxi was arguing with a policeman.

"But ef di light deh pan orange it mean mi can still cross!" he yelled. The policeman didn't respond. He just kept writing on a piece of paper. Someone bumped into me from behind and kept on walking without saying anything. I constantly felt like I was in the way, so I headed back across the road, near the entrance to the park. There I met Smitty, seller of chips and juices. Smitty has a scar near his right ear and lumps on his forehead. He told me that he sells in Parade everyday, including Sundays. I asked him if it was always that crowded.

"Mi glad seh Parade have nuff people, cause is so alone we get wi customer dem. Mi alright wid di crowd. Ef it want to have even more crowd mi alright wid dat too," he said.