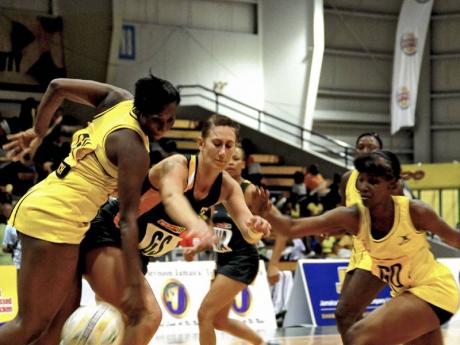 Jamaica's Sunshine Girls will be aiming to whitewash their South African counterparts when they face off in today's final match of their three-Test Jamaica Netball Association (JNA)-Supreme Ventures Sunshine Series at the National Indoor Sports Centre starting at 7 p.m.

The world's number four-ranked Jamaicans triumphed 63-48 and 61-46 in Friday and Sunday's games, respectively, to take an unassailable lead in the series.

The Sunshine Girls last recorded a 3-0 series shut-out over Caribbean rivals Trinidad and Tobago in 2011, and head coach, Oberon Pitterson-Nattie, said her team would be pulling out all the stops to complete the sweep.

"We have to win, and we have to do whatever it takes to win," said Pitterson-Nattie.

"I am sure that we have to make some adjustments, but my players are certainly up for the task, and I know that they will come and give of their best again because it is important for us to win," Pitterson-Nattie said.

However, Pitterson-Nattie has expressed concerns over her team's defensive unit going into today's final match.

Jamaica's goal shooter, Jhaniele Fowler, who has proven to be more than a handful for the South African defenders, after scoring 57 of her team's 61 goals in Sunday's victory, along with captain Nadine Bryan, defenders Malysha Kelly, and Vangelee Williams, are all expected to lead the Sunshine Girls' charge for a whitewash.

In the meantime, South Africa's head coach, Elize Kotze, said despite being down in the series, she remained hopeful that her team could come out victorious in today's encounter.

Kotze added: "Fowler, at the moment, is a huge problem for us because she scored 57 of the goals in this match. Everything that they do is around her, and so we are going to have to find a way to stop her from scoring freely against us."

Chrisna Bootha, who netted 34 goals Sunday, and Maryka Holtzhaunzen, who added 12, along with their captain Amanda Mynhardt and Anneret Viljoen, will lead the world's sixth-ranked South Africans' hunt for victory.