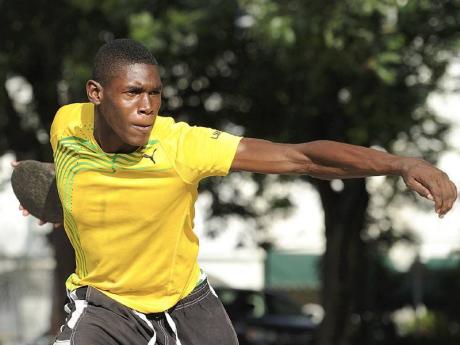 "I am extremely happy with my victory at the National Champion-ships and also to know that I did my personal best, although I am a bit disappointed as I knew that I could have done better," he said.

"But I will be working much more on my technique in the upcoming days as I want to execute much better," said Dacres just after winning the event.

The throw also placed him third on the International Association of Athletics Federations World Juniors' list.

A year ago, Dacres became the first Jamaican to win a global title in a throwing event as at the World Youth Championships in Lille, France, he captured the boys' discus with 67.05 metres. For the higher level World Juniors, Dacres says he must work harder to win.

"To win the gold medal, I think I will have to throw much further than my personal best, but I am pretty confident because new things are being applied at training sessions to get me much better and if it takes over 65 metres to win I will be ready to do so," he confidently stated.

Leading him in the event so far are Poland's Wojcieh Proczyz with 63.22 metres and South Africa's Gerhand de Beer with 61.46 metres.

"I have been improving steadily in training because my training partner is Travis (Smikle), my former teammate (at Calabar), and he is preparing for the Olympic Games and I am preparing for World Juniors and in training we compete against each other and that helps to motivate me a lot because I want to beat him and want to do better than him," he continued.

"We both enjoy the friendly rivalry and we see this as fun as this takes out the stress from the training sessions," he added.

Dacres also draws inspiration from another of his former Calabar teammates, Chad Wright, who created history recently at the National Collegiate Athletics Association Championships in the United States for the University of Alabama, where he became the first Jamaican ever to take home the gold medal at the Division One Championships as 2011 World Youth discus champion.

"Based on what Chad did recently, it has really helped to motivate me much more in training and I am happy for him as he is the 'guinea pig' for coach Robinson's (Julian) programme, and he has set the pace for us and once he does well we can all do the same," concluded Dacres, who showered a lot of praise on his coach.